We are getting reports that Skype is down, along with their download servers. We have tried ours and all is fine, but millions of users around the world have reported that service is unavailable to them. Some have said that they cannot connect while others find that the software is crashing altogether.

As we are able to get online we thought that maybe it was a mistake, but Pocket-Lint is also having the same issue. This is a serious problem for not only them but for you as well, as they use Skype to communicate with colleagues. However, the tech site has now learned that the outage seems to be only for Windows users, as those on Macs, Android or iOS devices are able to connect.

Skype is already aware of the issue, and has updated their Twitter feed saying that they are trying to resolve the issue. They did not give any indication as to what the issue was, or how long it is likely to take. We would suggest trying to connect to Skype on alternative to a Windows PC or laptop. 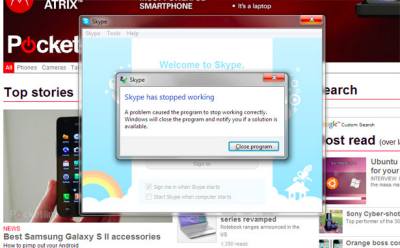 It is amazing how much we rely on VoIP, as not only do we need it to chat socially, but also for business. Many companies use this as a way to conference call, as well as video. However, it never seems to get as much attention as when Twitter or Facebook goes down.

Is Skype down for you?

Update: Skype is now back up