The Transformer Prime from ASUS is still considered to be a new product on the market another numerous stock delays, but now we have a picture to show you which suggests that ASUS already may be planning the next model in their growing Transformer family.

The current Transformer Prime can be identified by its model name TF201 and was the first device to ship with an NVIDIA Quad-core processor and Ice Cream Sandwich, the latest version of Google’s Android software.

Now though, a new model has been spotted and it carries with it a model number of TF300T and an unusual red theme which we have a picture of to show you. Engadget has got their hands on the image which has originated from a Taiwanese website. There’s no indication on what hardware changes have been made to this version, but the image does suggest that ASUS has removed the LED flash component from the rear camera.

This model is rather mysterious actually, for another reason which we’ll remind you of. At the start of January, we told you that ASUS had unveiled an upgraded model of their Transformer Prime at CES 2012, one which came with a better display resolution and an upgrade to the front-facing camera amongst other tweaks. Now the model number of the upgraded unit has been identified at T700T, which is obviously higher than this TF300T information that we mentioned above.

Could we just be seeing a red variant of the original ASUS Tranformer, instead of being another upgrade to the Transformer Prime? Since we don’t have any further details, it’s hard to tell at the moment, but we’re guessing that this mystery will be solved soon. Let us know what you think of this red model and if you would be interested in picking one up if it turns out to be a new Prime. 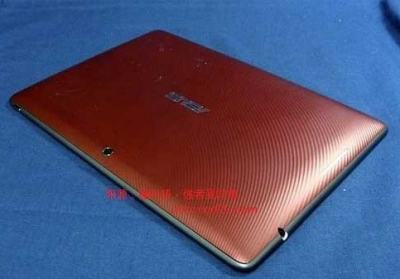