Why does Siri say July 27th 2014 is Opening Gates of Hades? This is the question a few of us have been asking this weekend after the date passed, which we first heard about right at the end of 2013 after its initial discovery. You might have even heard about this back then, although interest in asking Apple’s Siri “What is July 27th?” obviously started again yesterday. Even more confusing is when you ask Siri about September 3, which is apparently about closing Gates of Hades.

This led to YouTube users posting videos and social networks like Twitter or Facebook asking if there’s some big meaning to Siri’s message. Even more crazy were some of the claims, especially after Ramadan ended around the same time.

We’ve included a video below this article looking at the Siri message in detail, so take a look and make of it what you will. In our opinion, this just reveals that some people look into things way too much and even when it’s a computer generated message from Apple’s software. 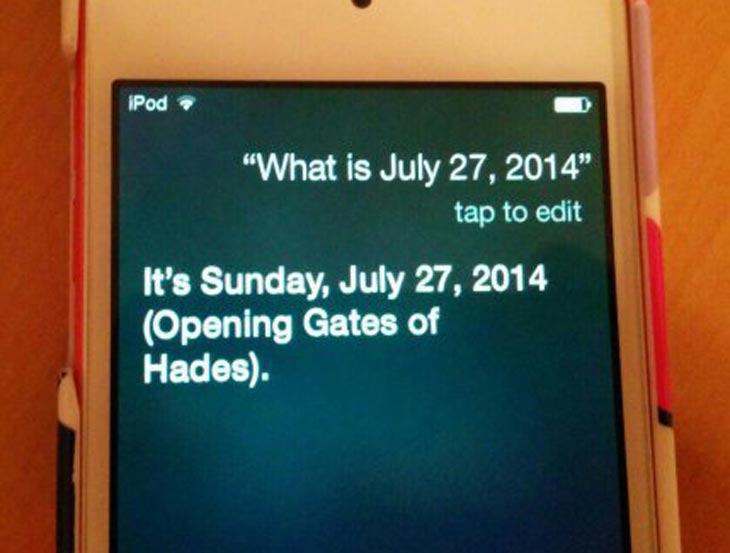 There’s hundreds of tweets as well, again highlighting how some people take messages like this even from Siri. If you want to read something even more extreme, then you should see an article on The Controversial Files website.

yesterday 27th july was the opening of the 'gates of hades' & the 3rd of september is the 'closing gates of hades'? the start of the end lol

What’s your thoughts on the opening and closing for Gates of Hades messages? You can see another message displayed in the screenshot below, which answers “What is September 3?”. Siri explains this is “closing Gates of Hades”.