If you own an Apple iPad or iPad 2 and you enjoy playing top-down racing games, I’m pretty sure that you’ll like Bjango’s recently released Sideways Racing. This top view racer for iPad is reminiscent of old style arcade games, but with improved graphics, improved sound and modern physics.

As David Appleyard over on the ipad.appstorm.net website notes, the Sideways Racing game features three different game types: League, Time Trial and Knockout, which sees players racing round all tracks from all areas in succession. Winning a race gives you the privilege to race again.

If you lose however, you will be kicked out of the competition. As you can pretty much tell by the title, the League mode centres around a series of leagues. Each time you win a league, you will unlock another one. Races, tracks and competitors do get more challenging the more you progress. 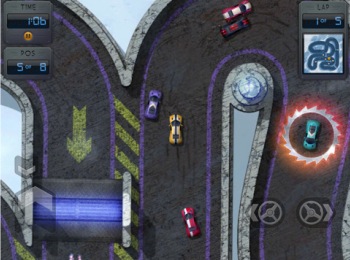 Meanwhile, the Time Trial mode pits you against the clock. You can even compete with your friends for the best time using Game Center. The Sideways Racing game features a total of 9 different tracks to race around, with players competing against up to 10 other vehicles at the same time.

Players are able to collect various power-ups, which can repair damage to your car, provide you with a nitro boost and a number of other things. This fun and addictive top-down racing application is sure to keep you occupied for hours. Do you like the sound of the Sideways Racing game?