A new social networking game Sid Meier Civ World has recently gone live on Facebook for beta testing, the game has been developed by Firaxes Games and it is completely free to play without any invitation needed, so we thought we would have a play on the game to see what it’s like and give it our own mini review.

What we found out very quickly was that our efforts would be cut short because we could not connect to the game servers on multiple attempts (see the image below), this doesn’t seem to be a problem which is affecting everyone, however we think that it is pretty widespread as when we checked out the 2KGames Forums there were lots of reports of people experiencing similar problems to us. 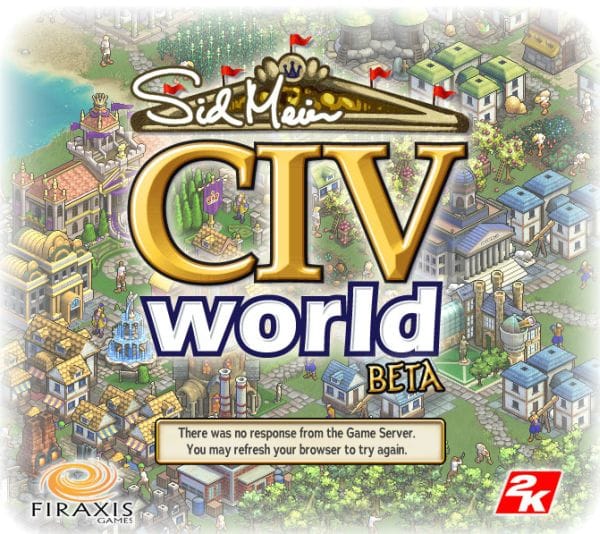 It appears as though the guys over at Mashable have been able play the game, they recently published a review of the game based on the beta. In the review they say that despite the game not being as difficult as its single-player predecessors (Civilization) it is still pretty complex, especially for a Facebook game. In terms of imperfections they said that both the messaging system and event logs could do with some work and also suggested that social elements could be enhanced.

As the game is being beta tested there were bound to be some teething issues, however we doubt that Firaxes Games’ developers expected such a widespread game server issue, perhaps this is because there is a lot more demand for the game than what they had thought, your guess is as good as ours.

From what we can see Civ World has found a niche in the market and could be a huge success, once the game’s reputation picks up there will be a huge fanbase and then developers can start charging for in-game items to help cover development and server costs. Whether you buy purchasable content or not is up to you, however we would imagine that to be a formidable force in the game some of you will be tempted, do you agree?

We wanted to review this game but were unable to so we welcome any of you who managed to get into the game to leave us your feedback in the comments section below, feel free to let us know if you are happy with Civ World’s social elements and also list any of the game’s pros and cons.