Since PlayStation Move was announced at E3 2009 it has always been compared to Microsoft Kinect, PlayStation boss Shuhei Yoshida has recently revealed that these device comparisons have resulted in a lot of extra coverage for Sony’s motion controller.

What Yoshida is basically saying is that Microsoft has inadvertently built up the hype for PlayStation Move, here is an extract of what he had to say to GamesIndusty.biz “In a broader sense, we are categorised as ‘motion gaming’ – if we were just doing Move, we wouldn’t have had as much coverage and attention from media and consumers”.

I have always said that competition in a particular market is great for everyone, it results in a better end product for consumers and also makes developers/manufacturers work harder to find a niche, this is very evident if you compare Kinect for Xbox 360 and PlayStation Move.

Now that Sony has released PlayStation Move they seem very keen to promote its price and functionality, we have embedded an image below which Sony recently released, what do you make of the comparison chart? 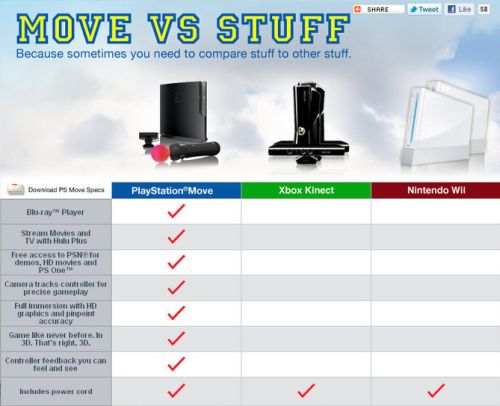