There’s a number of signs suggesting that Apple will be shrinking the Mac Mini in 2014 and this idea has picked up momentum among fans, analysts, and media over the past couple of weeks.

The existing hardware bumped up the specs compared to the previous model with 2x faster processors, graphics delivering up to 65 percent more pixel performance, and the addition of an optional Fusion Drive for a flash and traditional hard drive combo.

Shrinking the 2014 Mac Mini – it is the storage area that can help shrink the size of Mac Mini right away and by offering Flash storage by default, all owners of the 2014 Mac Mini can benefit from storage delivering around five times disk drive performance. Whether Apple would choose this option over a Fusion Drive or traditional hard drive is up for debate.

Most Apple fans are excited to see what the 2014 Mac Mini update might look like and some even create concepts of what they want to see, like in the picture below that obviously takes its design idea from the new Mac Pro, but this alone reveals a desire for smaller form factors and innovation like we saw with Mac Pro.

One Product Reviews reader made their thoughts clear, “Apple is moving towards flash storage and they can shrink the 2014 Mac Mini even more if they take out the hard disk drive”. Another wasn’t sure if smaller is better, “I think the Mac Mini is just the right size, why go smaller? I agree that Flash or Fusion Drives are better, but I’m not bothered about seeing the 2014 Mac Mini shrink”.

Would you like to see a smaller Mac Mini in 2014? The price for SSD has got better and there’s a good chance we will see SSD by default, but it’s good to remember that Flash storage is still more expensive compared to traditional hard drives and this is one reason Apple released the Fusion Drive that received good reviews. In fact, I’m typing on a 2013 iMac right now with a Fusion Drive that has certainly impressed in terms of drive speed.

The Mac Mini set a new benchmark for small computers when it first released back in 2005, but since then we have seen many other options arrive that are much smaller. The optical drive is now a memory and some people believe that the traditional hard drive could soon be the same, thanks to the benefits of today’s SSDs.

ASUS will start selling their new Chromebox next month, just five inches square, and this alone makes the current Mac Mini look slightly overweight. The issue for Apple fans is that they love Mac, and some would much rather purchase a new Mac Mini in 2014 that shrinks in size. 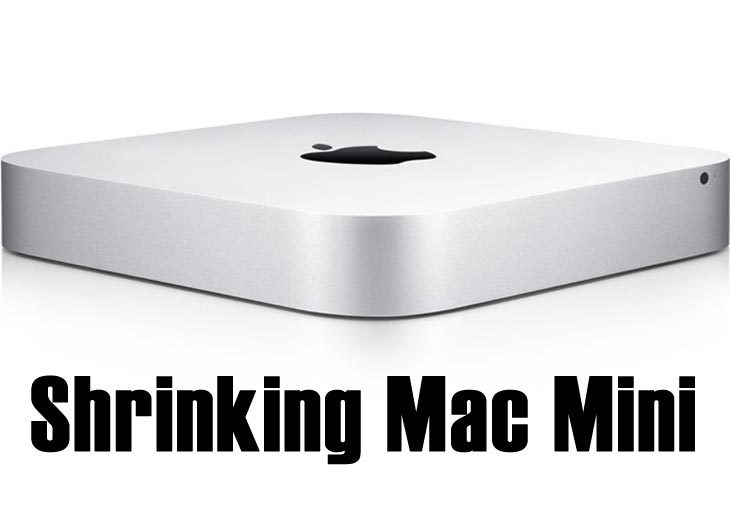 Why not to shrink the 2014 Mac Mini – as I stated above, the 2013 iMac I’m writing on right now changed a lot and includes a Fusion Drive along with a much slimmer design. This slimmer display is impressive, but to be honest you never see how thin it is unless you look from the side. There’s no particular good reason to make the iMac much slimmer, but Apple did it anyway and it looks sleek.

There might not be any major reason to shrink the 2014 Mac Mini, the size isn’t outrageously big and when do you take your Mac Mini out of your home. There’s room for the computer to get smaller, but it will not be easy to include the integrated power supply and make the 2014 Mac Mini shrink. If Apple made the power supply external again, then this would be an easy task.

Keeping the power supply inside and making the form factor smaller could lead to heat issues, so Apple will need to account for this in some way. We don’t normally see Apple reverse a design decision, so it is hard to believe they will move the power supply outside of the Mac Mini chassis.

How would you like to see Apple change the Mac Mini with a new design in 2014?