In what seems like an age, consumers in the US must be feeling a little anxious by now to get their hands on Samsung’s new Galaxy S II (S2). We now know that the device will be released very soon in North America, who has had to sit and watch while those in the UK enjoyed the device. Thankfully the South Korean company announced that the release will be very soon, and we believe that it will be Verizon that blinks first.

We have also learned that Sprint’s version if the Galaxy S II has hit FCC, but we feel that the carrier should procrastinate its release, as the Within needs to be more like the Epic. There were four versions of the Galaxy S last year, with all four major US carriers going for different designs. However, it was Sprint who had the best due to a number of reasons, and one of those was to wait and bring theirs out last.

There is a saying “The best things come to those who wait,” and that was very true last year. Sprint just needs to take a little back seat just to see what Verizon and AT&T has to offer. As yet T-Mobile has not shown any interest in taking up the S II, but they would be stupid not to — although they might feel that they would rather put their efforts into getting the iPhone 5?

Sprint might be able to one-up Big Red, as it is believed that their version of Samsung’s new Android handset will lack LTE, and we do not expect AT&T to offer it either, However, AT&T is rumored to be launching two version, one of which will have a QWERTY slider just like the Epic did last year. However, we do not know if this is ture or not, as we believe that Verizon will offer LTE support for the S II. 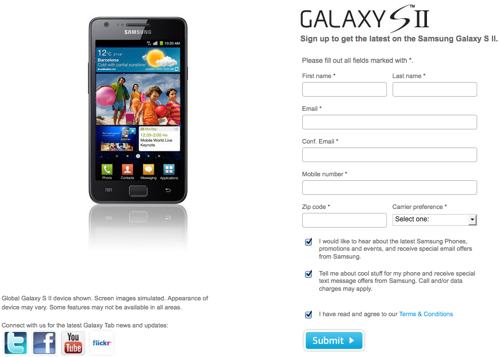 This is where Sprint will be able to trump these two carriers if they time their release perfectly. Let AT&T and Verizon battle it out with each other, all the while Sprint then comes along makes their Galaxy S II the better looking, minor feature tweaks, Full QWERTY keyboard and finally the ace up their sleeve, 4G connectivity.

Playing the long game is the best way to succeed, but it is not without its drawbacks. If Sprint waits too long then by that time there will be a host of new handsets to worry about. OK, we know that the iPhone 5 will be one of them, but what about competition from Samsung, as they are to release the Galaxy R and Q later this year. The former is a more affordable Galaxy, while the latter is a more beefed up version. What ever happens, we are in for a few crazy months in the smartphone market.