It has come to our attention that the recently released Silent Hill HD collection has come under fire from gamers, who are complaining that Konami has done a very lazy job in transferring the graphics from the PS2 over to HD quality.

The Silent Hill HD Collection includes remastered versions of Silent Hill 2 and 3, both of which originally appeared on the PS2. However, players have discovered that the fog effects that are a key aspect of the game are inexplicably missing from the HD collection, resulting in an outcome which actually makes the PS2 originals look better – if you can believe that.

In a further twist, one of the original developers for the PS2 games who didn’t work on the HD collection has spoken on Twitter, expressing his disappointment when being shown the same screenshots and lack of fog effects on the HD version. He now works as a freelance artist and thinks that Konami needs to release a patch to the game in order to put things right, as noted by Eurogamer.

He also mentioned that the poor graphics conversion could be down to difficulty with the PS3 hardware, but we have a feeling that he is just being as kind as possible to his former colleagues – there’s no excusing those screenshots as you see below. The game is already out in the US, but those of you in Europe still have time to make your mind up on the game as it’s out at the end of his month.

Are you disappointed with the quality of the Silent Hill HD Collection? The PS1 original remains one of my favorite games ever – took me forever to figure out that you had to put the pink rubber ball in the gutter on the roof! 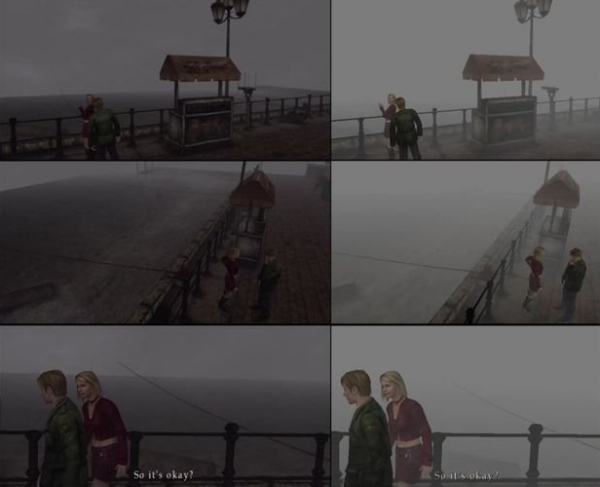