Believe it or not, but it looks like Stoke are ready to smash their record transfer fee to bring speedy Switzerland midfielder Xherdan Shaqiri to Stoke from Inter Milan.

If you watched the Liverpool game recently, many of you would have seen the player in the crowd which set social media alight on a possible transfer.

Those who play as Stoke on FIFA 15 are going to be in dream land, as we are talking about a world class player here who is now set to make an unlikely move to a club outside the ‘big 4’ and to trade in the high life in Milan for cold Tuesday nights in Stoke.

Shaqiri has a great rating on the game at the moment, a default 80 which has been increased to 82 thanks to good performances – 90 pace and 90 dribble is simply amazing. 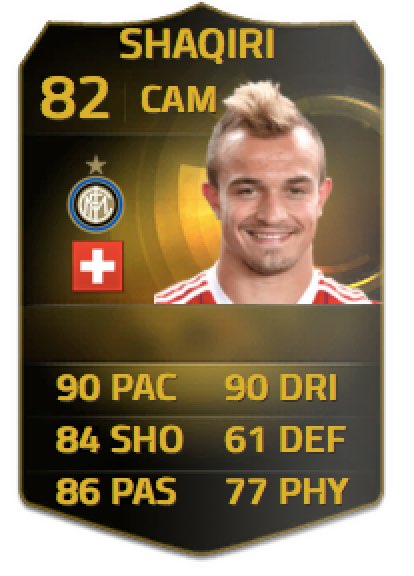 This means that on FIFA 16, we could see a ratings increase to an 81 which would make him one of Stoke’s highest rated players in the game along with goalkeeper Begovic and ex-Barca man Bojan.

It looks like this transfer is just about to be completed so give us your reaction to it below. As a daily Stoke City FIFA player, is this a dream come true for you being able to attract big names such as Shaqiri?