We have some FIFA 14 news to bring you now and it is specifically good for those that are currently enjoying the FIFA 14 World Cup update as part of the ongoing FIFA 2014 World Cup in Brazil.

The news, is that EA has decided to upgrade Xherdan Shaqiri’s stats on FIFA 14. This is due to the player having a real-life man of the match performance in the recent Switzerland Vs Honduras by scoring a hatrick.

It’s great to see EA on top of the ball too by instantly providing FIFA 14 Ultimate Team players with a new 81 World Cup card for the player.

You can see evidence of this here. with the 81 card replacing the standard 80 rating that he had for Switzerland at the start of the World Cup. Stats improvements include 89 dribble vs 86 dribble, 82 shooting vs 76 shooting and 88 for pace vs 87 pace on the previous card. 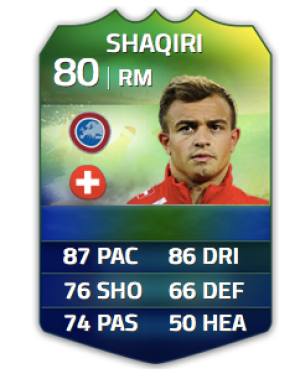 It’s also exciting for FIFA fans as Shaqiri to Liverpool FC is one of the biggest transfer news stories right now as well – he currently plays for Bayern Munich though. This performance for Switzerland may have increased his valuation by a few million, but hopefully he will end up in the Premiership by the time FIFA 15 arrives.

Let us know what you think of the good news that EA has updated the stats of Shaqiri for Ultimate Team. How highly do you rate this player?