Technology has made it much easier to see September 11 pictures, and iOS users can download a new app called Explore 9/11. Launched on August 26, the app lets you look at 9/11 photos and interact with the World Trade Center site like never before.

The idea behind the app was to let users understand 9/11 from those that actually witnessed the events, this is thanks to photos uploaded to the National September 11 Memorial & Museum database, which are then accessible via the iPhone, iPod touch, and iPad app.

Explore 9/11 main features include a walking tour, which lets you see seven areas around the World Trade Center, and these each include text, photos, and audio from eyewitnesses. The app has taken us back a bit with its graphic detail, but it’s also very informative for those that want to learn more about the events on 9/11. 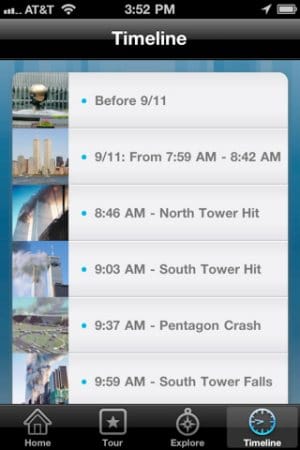 Important September 11 events are covered in the timeline, and the latest version — updated Sep 10, 2010 — includes improved geocoding and a new augmented reality mode for photos. At the time of writing, Explore 9/11 has been downloaded over 100,000 times.

You can find out more and download the app for free on Apple iTunes. Do you think its right for people to upload their 9/11 stories and photos for viewing on this app?