If you are a fan of SEGA Rally Games you may have been frustrated with the lack of a console release on any of the major consoles since the 1998 SEGA Dreamcast release, however now have some great news for you as Sega Rally Online Arcade is coming to the Xbox 360 and PlayStation 3.

SEGA Rally Online Arcade will show up on the Xbox Live Arcade and PlayStation Network later this year, details are scarce, however SEGA’s Vice President of Digital Business had this to say about the game “We’ve blended our hit arcade racing series with the best elements from the console versions to bring our fans the SEGA Rally experience in compact, downloadable format”.

Apparently when it arrives gamers will be able to race against each-other and also try and also play its well-known Time Attack modes and Championship battle, there will be a new achievement system, 13 rally cars to choose from and online leaderboards, all in all it sounds like a pretty solid arcade release. 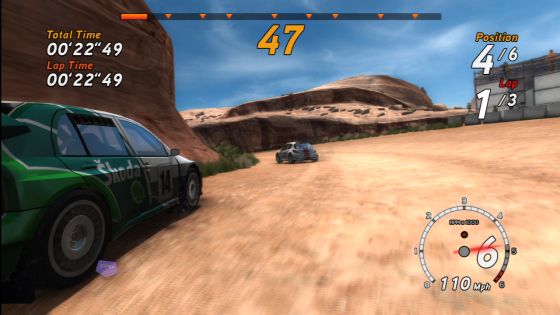 We have embedded a video at the end of this post showing some SEGA Rally 3 gameplay, I think if SEGA Rally Online Arcade’s visuals are anything like this the arcade game will look pretty good, let’s just hope its Xbox Live and PSN integration is a hit. If you check out this link you can see a few screens and further details regarding the upcoming game.

All we know at the moment is that this game will arrive in 2011, as we find out more we will keep you posted. Will you buy SEGA Rally Online Arcade?