A few days back we reported that Best Buy could be getting the White iPhone 4 on February 27, 2011. However, we were uncertain how much truth there was to the rumor, so thought that you needed something different. We now have details of a see-through case mod — this has to be the ultimate case yet for Apple’s smartphone?

A guy called Richard tipped of Pocket-lint about this mod, they warn that you should not try the case-mod yourself. To see just how funky it looks to see the innards of a fully working iPhone 4 visit mobile.uwants.com. If I knew I was keeping my handset for myself instead of giving it to my wife — then I might be tempted to do it. 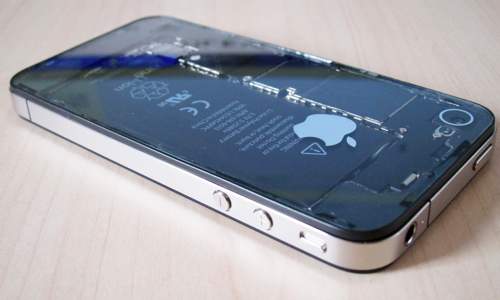 You will notice by the images that there is not a lot to see, but it does give it that raw feeling, which never appears in a sentence normally with Apple. Pocket-lint believes that the best angle to look at the see-through iPhone 4 while on is from the rear, as you get “screen bleed”, which lights the rear up a little.

Given the choice of the two I would still much rather the White iPhone 4, but I just cannot see that happening now. I believe that Apple should consider offering the iPhone 5 in a range of different colors not just black or white. However, they still struggle with producing two — what chance do we have of red, pink or blue?