The highly anticipated PlayStation All-Stars Battle Royale game is not due for launch until the middle of October, but we have some news of interest for you. Whispers are emerging that a secret beta has already begun for select PS3 users and those with a PS Plus subscription to the Hong Kong PS Store.

As far as we’re aware, the developers over at Superbot nor Sony via the PlayStation Blog have made an official announcement on this. The reason for this, as we see it, is that the beta is only accessible through the Hong Kong store at the moment, when ideally a lot of you are waiting for the beta to go live in the US and Europe.

Those participating in the beta are probably confined to silence, so no major leaks slip out before release. We can tell you however that the beta gives you access to six characters and they are: Kratos, Parappa, Radec, Sweet Tooth, Fat Princess and Sly Cooper. You’ll be able to participate in multiplayer matches and word on the street implies that the beta is very fun indeed.

Have you received a code yet? We’ve read that some lucky users have already received codes, despite the fact that they are not a PS Plus subscriber. This could be due to Sony’s selection policy where they choose users who they deem to be ‘active PSN users’ – whatever that means. 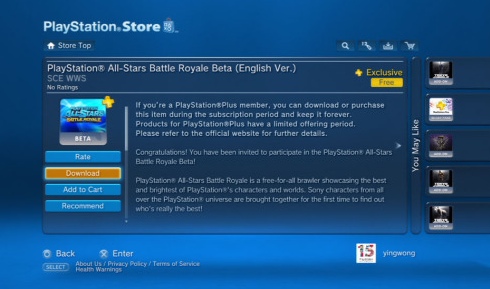 If you have managed to get in, drop us a comment below without spoiling any info on the beta itself. We hear that the beta is only going to be available for one day, so it really is an exclusive closed test – consider yourself lucky if you get in.