A couple of weeks ago we told our readers about a newly released app called VideoPuzzle, a revolutionary new puzzle game for iOS devices. Today we have news about the launch of a similar application, which comes in the form of Scrambleface — an introduction.

As noted on the appdebate.com website, the Scrambleface — an introduction app is an innovative new game for the iPhone, iPod Touch and the iPad 2. The game takes a live video feed from the device’s rear or front facing camera, and turns it into a live action sliding puzzle.

Watch in amazement as the application scrambles your face up, and laugh out loud at the crazy combinations. If players laugh or frown, their mixed up faces will do exactly the same on screen. The application only comes with 14 levels, but more are available via in-app purchase. 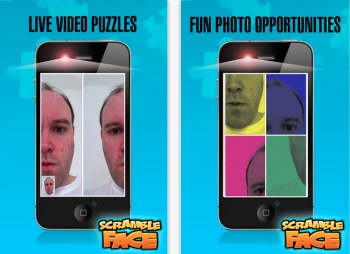 The Scrambleface — an introduction game features both upside and twisted stages, as well as Time Challenges. Both you and your children will have so much fun rearranging your faces in real time. As noted on itunes.apple.com, the app does require iOS 4.1 or above.

Do you own an Apple iOS device? If you do, would you download the Scrambleface — an introduction app?