It looks as though Samsung has been given a reason to celebrate this week, after its TV App Store — a service available on their Smart TV range — reached the download landmark of 2 million. It was only about a month ago, that the Samsung App Store surpassed the 1 million mark.

As Marc Chacksfield over at techradar.com notes, these figures prove that the idea of being able to access applications through people’s television screens is becoming more and more popular. With the recent introduction of a “search everything” bar, navigating the apps should be a lot easier. 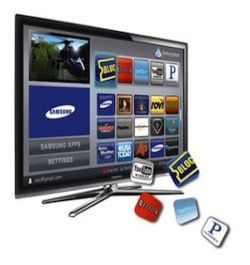 The Samsung TV App Store already includes many social networking and movie-related applications such as Twitter, Facebook and LoveFilm, and it now appears that even more companies want to add other apps — such as Skype — to connected television sets.

According to a recent article by David Jani over at itproportal.com, some of the most downloaded apps on the Samsung TV App Store include Texas Holdem, Google Maps, ESPN Next Level, AccuWeather, Hulu Plus and YouTube.

With Samsung planning to sell 12 million Smart TVs just this year, it looks as though the download landmark of 3 million won’t be too far off? Do you own a Samsung TV? If so, what do you think of the TV App Store. I have to admit, we love using the apps on ours.