We have some disappointing news for those of you who were hoping that the Samsung Stratosphere was going to turn out to be something special and a great alternative to the imminent Motorola Droid Bionic, also on Verizon.

It turns out that the Stratosphere is actually just a Verizon variant of the Samsung Epic 4G on Sprint, only the handset has been modified slightly to include a 4G LTE radio and it will also retain the slide-out keypad also seen on the Epic 4G. This is contrary to previous rumors speculating that the Stratosphere would turn out to be Verizon’s version of the popular Samsung Galaxy S II device.

That means instead of featuring ‘next-gen’ specs such as a dual-core processor and 1080p HD video recording, we are fearing that the handset may only come with a 1Ghz single-core processor and around 500MB of RAM. We do know thanks to information obtained from Pocketnow that the Stratosphere will come with an ‘excellent’ dislay though, as well as a 5 megapixel camera and a 1.3MP front-facing camera as well.

The pleasing factors about the Stratosphere though is that it is set to ship with the latest version of Android Gingerbread 2.3.4 and it will also come in at a very affordable price compared to the more expensive Droid Bionic. $150 on contract is the price that’s flying around at the moment, so it may still tempt a few of you into a purchase due to its low fee alone. 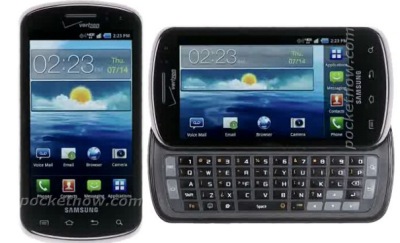 It now looks like the Droid Bionic will remain the premium handset on Verizon for the time being, and as we mentioned in a previous report this week, it should be arriving on Thursday September 8th. Sadly, it seems like the Stratosphere won’t be on par with the Droid Bionic in a head-to-head specs battle, but it will appeal to consumers looking to pick up the latest handset on Verizon at the best price.

Are you disappointed with the findings after keeping a eye on the Stratosphere? How do you feel that it looks to be a rehashed version of the Epic 4G?