We have some exciting news for you now, as the first image of what looks to be Samsung’s first 4G LTE handset for Verizon has been leaked online. This follows news yesterday that Motorola will be the first manufacturer to release a 4G phone on Verizon’s network.

The image is located over at Gizmodo, as they have been given the image via one of their unnamed tipsters. We don’t have a codename for the device yet, but we do know that it’s official model number is SCH-I520.

Furthermore, it looks like the device will have a front-facing camera (1.3 megapixel?) and Android 2.2 Froyo on top of a TouchWiz User Interface. Gizmodo also states that the device won’t have Bing features built into it like other recent Verizon handsets – which you would probably agree is a good thing. 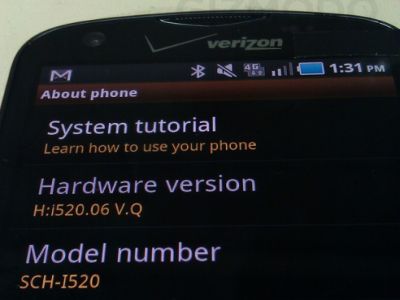 You can clearly see in the image that this is indeed a 4G LTE handset, as the status bar at the top reveals a 4G signal logo. We presume that this handset will be getting an upgrade to Android 2.3 Gingerbread next year, but it’s still slightly disappointing that unlike the Samsung Nexus S, Gingerbread won’t be coming straight from the box.

We’ll bring you more details on the SCH-I520 as we get it. You can’t see much from the image, but what are your early impressions? Would you rather have a Motorola or Samsung 4G LTE device?