Over the last year or so solid-state storage technologies have come on leaps and bounds, recently Samsung unveiled a new series of SSDs which they claim will raise the performance bar for future tablets and notebooks, these are the Samsung PM830 solid-state drives.

All of the PM830 SSDs support the SATA 3.0 interface, which allows for 6Gb/s data transfer, the drives utilize multi-level cell NAND memory chips and the toggle DDR architecture, this is said to deliver double the performance of a SATA 3Gb/s drive – we are told that all of the drives in this series will deliver sequential read speeds of 500 MB/s and sequential write speeds of 350MB/s. In terms of capacity there will be 128GB, 256GB and 512GB options available.

If you are concerned about data security we can confirm that these drives use an AES 256-bit encryption algorithm to protect your data, in terms of performance a quote from the press release reads: “The SATA 6Gb/s SSD shortens system boot-up time to about 10 seconds, while its high-performance allows users to download up to five DVD video files in less than a minute”, it is a little unclear whether this is compared to a SATA 3Gb/s SSD or a SATA 3Gb/s HDD. 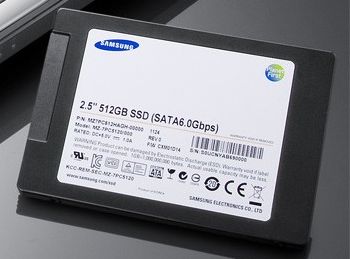 Currently prices are unknown, however Samsung seem keen to push these new SSDs towards the premium OEM notebook and tablet market and Samsung also expect its new drives to replace SATA 3Gb/s-based SSDs by the end of the year, we think that depends heavily on price. At first the drives will only be available to OEMs for installation into new computers and devices, however consumers will be able to buy a PM830 SSD to upgrade existing systems in the future.

We have not heard anything in terms of pricing, obviously OEMs will buy in bulk, however we are interested to see how much consumers will have to pay, all we know is what Samsung revealed in a press release, you can see it for yourself here.