Following on from the recent leaked photographs of the Google Nexus Two, now known to be called the Samsung ‘Neuxs S’, we now have more details for you, this time showing a few sample pictures from the Nexus S camera.

As reported from TechCrunch, three low-quality images have appeared on a Google Picasa album online, and we can see that the photos were definitely taken with the Nexus S, thanks to the included photo information besides the pictures. 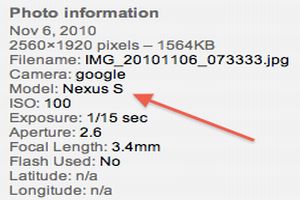 While the photos itself are nothing special, the important information to come out of them is the fact that the Nexus S is likely to be equipped with a 5 megapixel camera, which may be a disappointment for some of you expecting an 8MP+ sensor.

If you’d like to see the photos, you’ll find them over at TechCrunch. Are you disappointed that the Nexus S will only come with a 5MP camera or not?