These days every netbook we speak about seems to be similar to others which we have spoken about previously, however whilst the Samsung NC215S boasts pretty regular technical specifications it does feature something pretty unique, this is a solar panel on the lid.

According to liliputing the NC215S was meant to be being released during the early part of this month, however now it has been pushed back to August. No official reason has been given for this delay and no set-in-stone release date has been set, therefore as we hear more we will have to keep you posted.

In terms of tech specs you get the dual core Intel Atom N570 (1.66GHz) processor, 1GB DDR3 RAM, a 250GB SATA HDD, WiFi b/g/n, 10/100 Ethernet, Bluetooth 3.0 and Windows 7 Starter. As previously mentioned it features a solar panel on the lid (see below) which will apparently give you 1 hour of battery life for every two hours of charging time (in the sun). 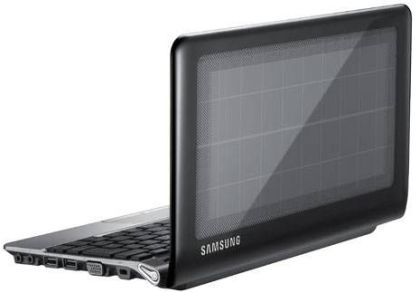 You can currently pre-order yourself the Samsung NC215S from Amazon for $399 here, no indication of a shipping date is given, however Amazon’s listing does reveal that it measures in at 10.2 x 7.1 x 0.9 inches and weighs 2.9 pounds. Despite its solar panel this netbook is not much different in size and weight when compared to other models, for example the Samsung NC110-A01 netbook measures in at 10.4 x 7.4 x 0.97 and weighs 2.93 pounds.

Samsung are promoting this product by saying that it is the world’s first truly wireless thanks to the fact that you do not require a mains adapter, obviously this is true, however we do not know how many hours the battery can keep the NC215S alive for, therefore it will probably need to be charged in the evenings. Even with that said we are still very impressed by Samsung for bring solar power charging to a mainsteam product, we really think this release could push more manufacturers to bring such technology to their products, which is obviously great in today’s world where low power consumption etc is so important to so many.

Hopefully soon we will hear a little more regarding its release date, features and technical specifications, when we do we will keep you posted. Do you think that solar power products will become more popular over the next few years?