If you own a 2010 model Samsung television and a Galaxy S smartphone or the Samsung Galaxy Tab, then we have a bit of information that could well be of interest to you. Samsung has just launched its TV Remote Control app for Android, which is compatible with Galaxy S handsets and the Galaxy Tab.

As Eric M. Zeman over on the phonescoop.com website recently reported, the application allows users to control their Samsung TVs. However, the app — which is free to download from the Android Market — does require a local Wi-Fi network to be able to control the television.

The TV Remote Control app is compatible with a number of 2010 models including the plasma C6500 series and above, the LCD C650 series and over and the LED C6500 series and higher. As Mike Luttrell at tgdaily.com points out, the app comes in handy when browsing Internet@TV content such as Facebook. 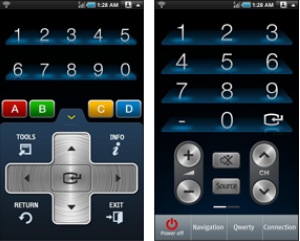 Accessing your favorite content will be made much easier with the Samsung TV Remote Control app, thanks to its dedicated Samsung Apps button and 4-way directional pad that’s ideal for scrolling through TV listings and menus. Would you find this app really useful?