Earlier on this week we gave you a heads-up on Samsung’s new Galaxy TabPro 10.1, which is part of the company’s new lineup of tablets for 2014. Now, we have complete information on Galaxy TabPro 8.4 specs to share with you, confirming that the smallest member of the new family is still going to pack a mighty punch.

Without wasting time, we are pleased to inform you that Samsung’s Galaxy TabPro line, as well as Galaxy NotePro line will be released globally from Q1 2014. That means that you should be able to find this new Galaxy TabPro 8.4 on sale in the UK and US at the same time.

Considering that we usually see staggered releases for the different regions, this is a great move by Samsung that consumers will appreciate once the dust has settled from the CES 2014 excitement.

As for the Galaxy TabPro 8.4, you’ll be getting some lovely specs for a retail price of around 389 Euros. These include a 8.4 inch WQXGA display with a whopping 2,560Ã—1,600 resolution, a quad-core 2.3Ghz Snapdragon 800 processor, 2GB of RAM and an 8 megapixel rear camera. 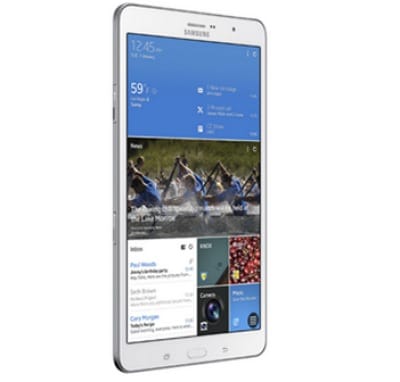 There’s also a choice of either 16GB of 32GB of internal memory, with the option of expanding on this further with MicroSD card. Meanwhile battery life should be excellent too with a 8,220mAh battery and as expected – Android 4.4 Kitkit straight out of the box.

There’s no set Galaxy TabPro 8.4 release date, but expect to see these appear in shops in the coming weeks. Those specs are very good indeed for an 8.4-inch tablet – let us know if you are interested in picking one up as a replacement for your current Android or iOS device.