The Samsung Galaxy Tab S3 is Samsung’s latest flagship tablet and there are a lot of whispers on how it is hands down the best Android tablet to be released so far in 2017.

We have just received our unit to review for you now and it’s safe to say that it really is a beautiful tablet to look at up close and personal and we’re not surprised why so many buyers are impressed with it.

It is an attractive unit to look at, mainly thanks to the glass on not only the front but also the back as well. While some of you may have preferred a matte finish on the back, it is clear that Samsung is going for that premium theme and that shiny polished look from all angles. The only problem with this is that it will attract a lot of fingerprints very quickly, but we have a feeling that most of you will be wanting to protect this right away by storing it inside a case during most of the day. The headphone jack is also located on the bottom of the tablet next to the USB-C port, not the top which most of you will probably prefer. The other striking observation about the Galaxy Tab S3 is that it is incredibly thin at just 6mm which will be another reason why Samsung has given this device a premium price. 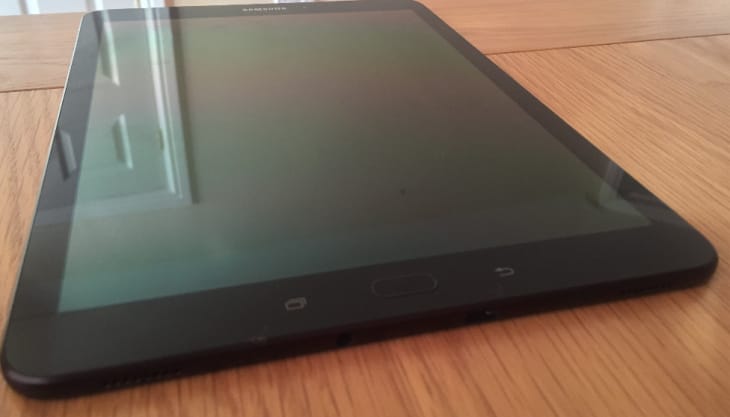 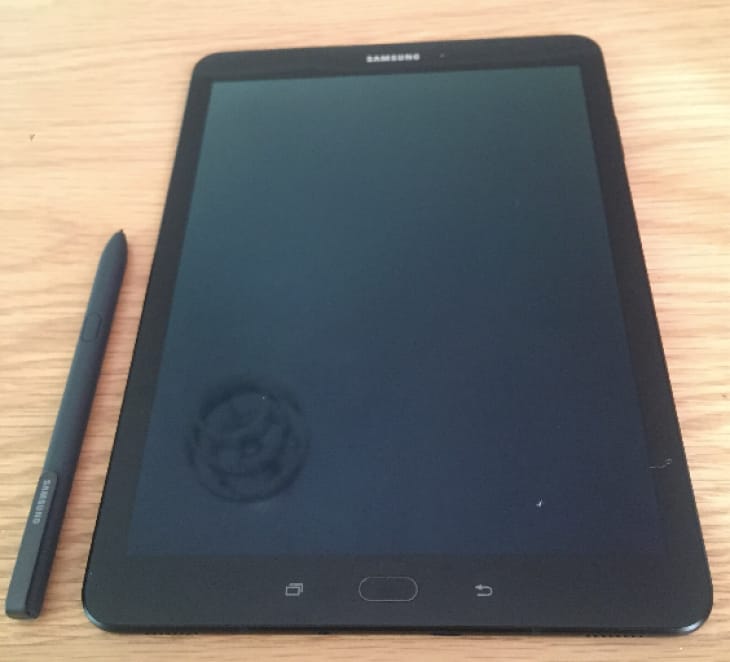 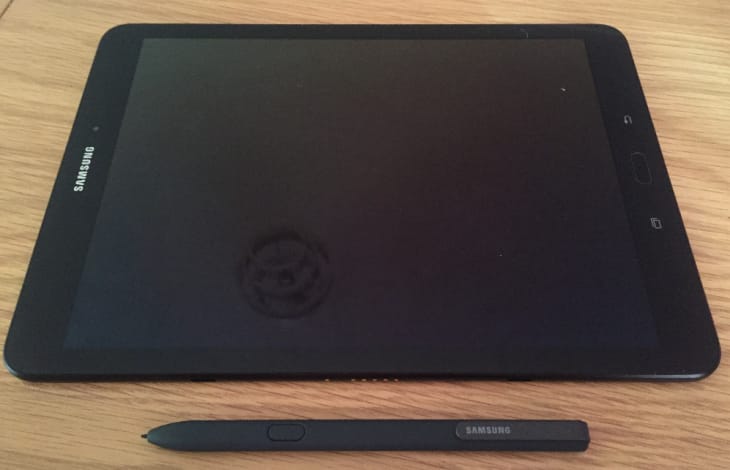 This tablet is packed with absolutely everything you could ask for. It features a Super AMOLED 9.7-inch display with a whopping 1536 x 2048 pixel resolution and 264 ppi.

The dimensions are 237.3 x 169 x 6 mm and it definitely has a premium feel to it compared to previous Galaxy tablets from Samsung. It’s also extremely lightweight too at 429g and doesn’t feel heavy at all when you are holding it with one hand and swiping with the other.

Powering the device is a Qualcomm Snapdragon 820 processor, with 4GB of RAM, 32GB of onboard storage and an Adreno 530 GPU. The CPU is comprised of two 2.15GHz Kryo chips and dual 1.6 GHz Kryo chips which means multitasking is an absolute breeze when getting to grips with all of the fancy multitouch gestures and split-screen support that Android 7.0 Nougat offers out of the box.

The display also supports HDR which is a very premium feature right within a tablet on the market. It means that if you have been enjoying HDR content on the likes of Netflix and Amazon Prime on other devices, you’ll be able to do it on the Galaxy Tab S3 as well – sadly you’ll have to wait a while though until your favorite apps roll out general HDR app support which may take some time.

As you would expect, the Galaxy Tab S3 supports MicroSD card as standard, up to 256GB which you will probably want to invest in since you only get an actual 19.3GB to use with 12.7GB locked away for system data.

Connectivity is another strong point with this tablet as you will get all the support you need. This includes Wi-Fi 802.11 a/b/g/n/ac plus Wi-Fi direct, dual-band, LTE, HSPA, Bluetooth 4.2, A-GPS and most importantly USB-C which allows for extremely fast charging with the 6000mAh battery under the hood.

Included is a 13 MP snapper on the back along with a 5MP front-facing camera for selfies and video calls. It offers 4K video recording at 30fps, but in all honesty you are not buying the Galaxy Tab S3 for its camera. It takes some nice photos and has all of the standard features including a nifty 360 virtual shot but nothing groundbreaking that you wouldn’t find anywhere else.

The Galaxy Tab S3 is very much a media powerhouse and has been designed for those that want to combine work with play. Work tasks on this tablet are very much catered for, with the S-Pen that is generously included inside the box unlike the iPad-Pro, while metal contacts located on the side of the tablet easily connect up the Galaxy Tab S3 keyboard when you want to switch to that laptop feel for heavier duties.

You’ll have a lot of fun with the S-Pen as well and can really let your imagination run wild or bring family photos to life even more. Take a look at how easy it was to add some text to one of our snaps from a recent country walk. 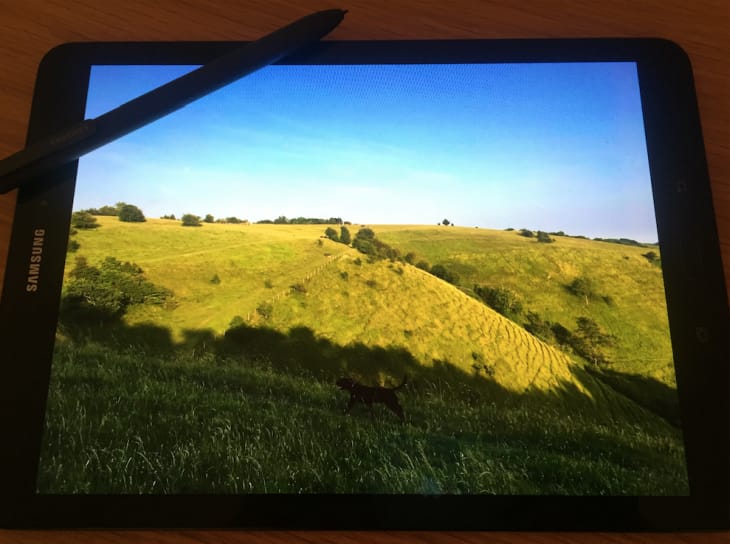 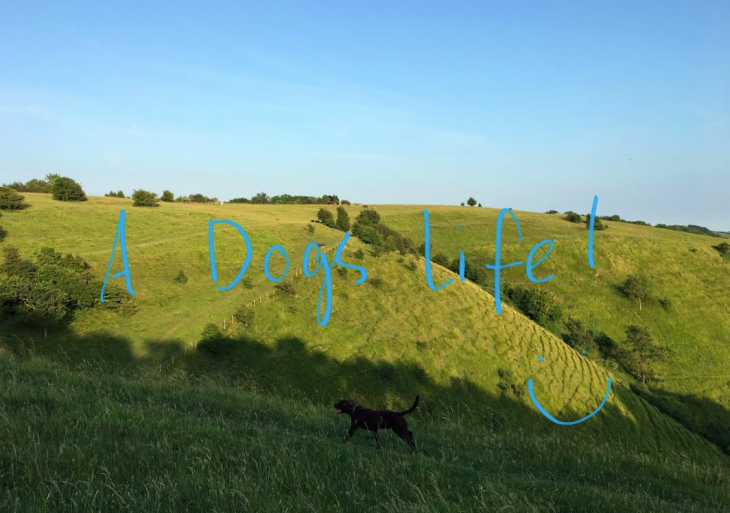 Another great little feature that might go under the radar, is the Galaxy Tab S3 S-Pen translation tool. If you are browsing the internet or playing a game and come across foreign text that you don’t understand, simply hover your S-Pen over the text and you can get an instant translation using a powerful engine, which is actually powered by Google. See an example below showing the translation of the word ‘screenshot’ from English to Spanish. 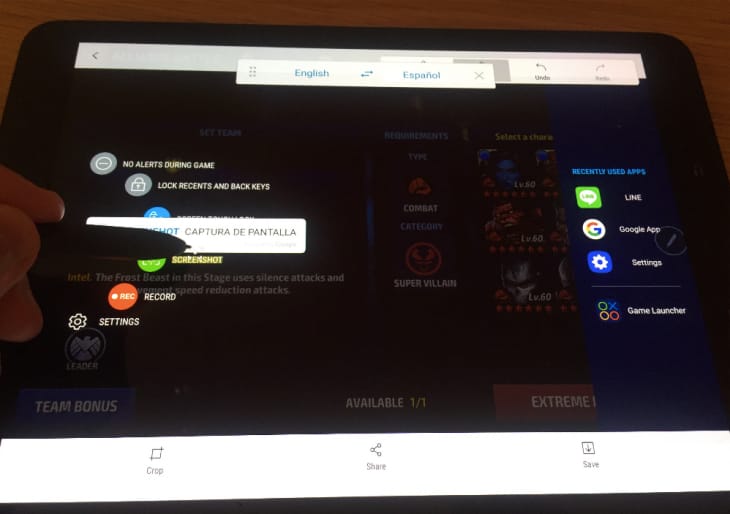 Watching movies on this tablet will be a dream for the casual tablet owner who is upgrading to the Galaxy Tab S3. The display is absolutely beautiful and arguably the best display seen in a tablet on the market at the moment – even ahead of Apple’s True Tone display on the iPad Pro. It also offers really nice sound quality which is delivered through four speakers (two at the top, two at the bottom) and makes use of  a partnership with audio experts AKG – hence the labelling on the rear of the tablet.

While not a specific feature of the Galaxy Tab S3 but rather Android 7.0 Nougat, Split Screen apps or Galaxy Tab S3 Multi Window works really well on that stunning display. Thanks to the Snapdragon 820 and 4GB of RAM, you will have no problem whatsoever seamlessly switching from app to app and bringing two apps side by side regularly. Not all apps support it yet, but when certain games do you’ll be able to have your favorite mobile game on half the screen and Google Chrome on the other with a walkthrough which could be priceless for gamers. 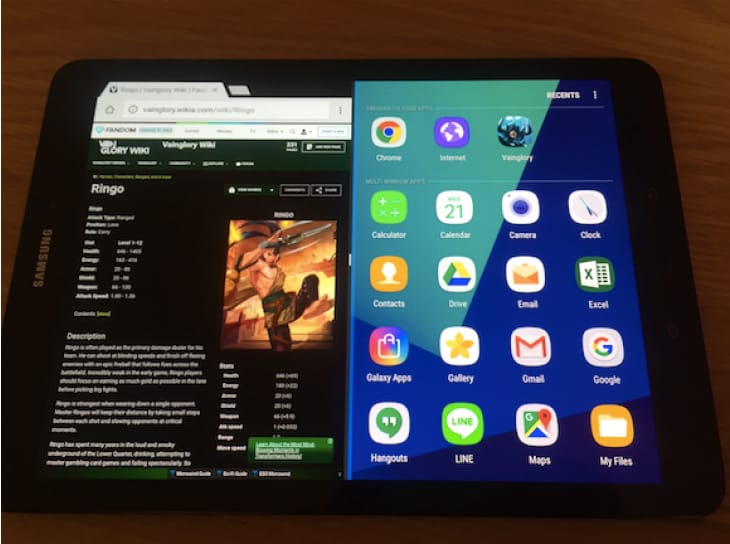 [Here you can see that popular MOBA Vainglory supports split screen. You can play the game on one side while searching for information on the game in a browser window, very cool! The Galaxy Tab S3 will only list the apps that support multi window, Not all apps support this feature yet. In time this shouldn’t be an issue] 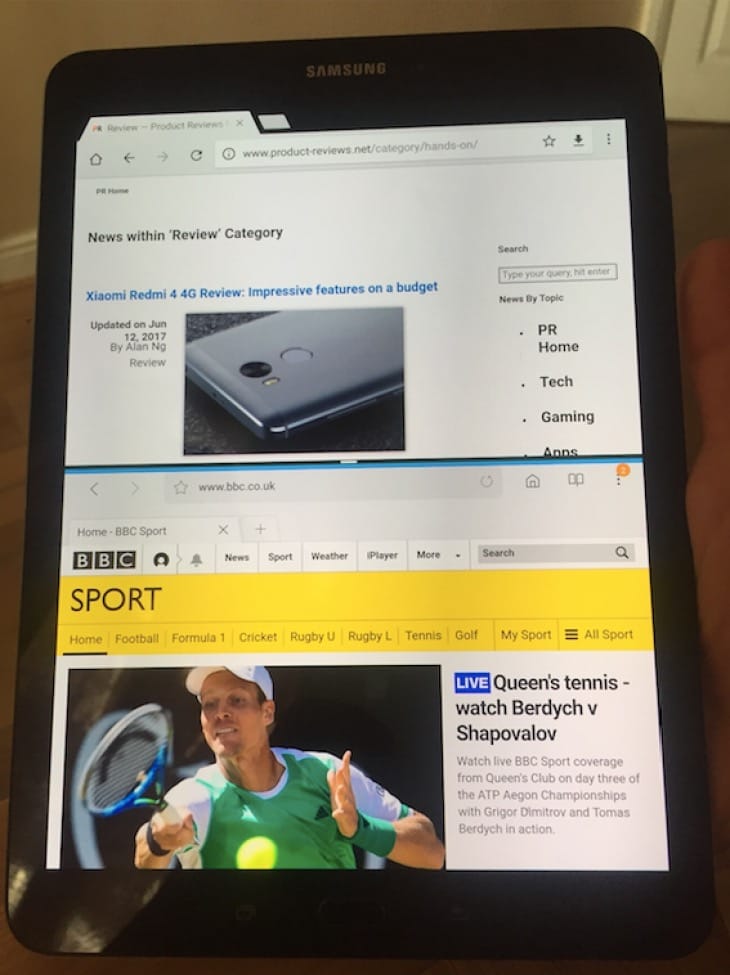 [Two browsers open at once, Google Chrome along with the stock Samsung web browser]

The Galaxy Tab S3 home button also doubles up as a fingerprint scanner as well. While you may not like the ‘clicky’ feel to the button when pressed, the finger print scanning is extremely quick and works just as well as any iPad.

Samsung has set up the Galaxy Tab S3 with some nice gaming features straight out of the box for anyone who is thinking of buying this tablet specifically to game on. With the latest high-end specs such as a quad-core Snapdragon 820 chip, 4GB of RAM and Adreno 530 graphics, on paper this should be more than adequate to handle the best of what the Google Play Store has to offer.

The built-in features include Game Tools and also a Battery Saving mode strictly for games. This allows you to boot any game at a ‘low’ or ‘extremely low’ resolution and drop the FPS to 30 to reduce battery life consumption. 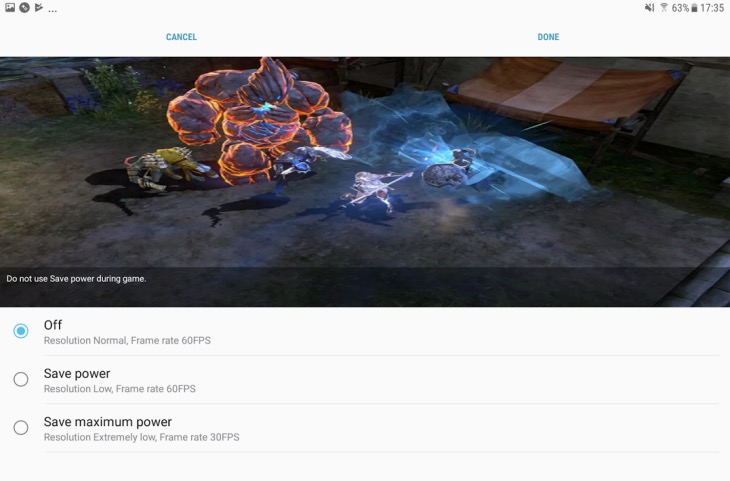 Game Tools is highly impressive in our opinion as it creates a transparent tool bar in the corner of the screen which brings up some instant options such as screenshot capturing, disabling all notifications whilst in-game and our favorite, the screen recorder. The screen recorder essentially turns your tablet into a mini streaming hub, allowing you to capture whatever game you are playing instantly, in high quality and using a choice of audio or microphone if you want to talk over your clip. You can even use the front camera to make a profile picture visible in the corner during your videos, for that added professional finish. Using the highest settings, the Galaxy Tab S3 has a 4GB size limit when recording and offers up to 80 minutes of footage at 1080p resolution – highly impressive considering you are doing it all within a tablet and without third party hardware. These limits increase if you choose to lower the resolution quality of your videos. 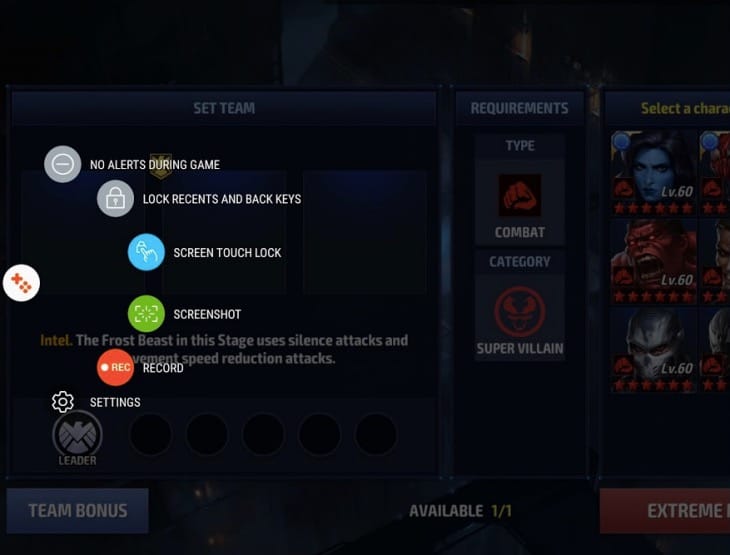 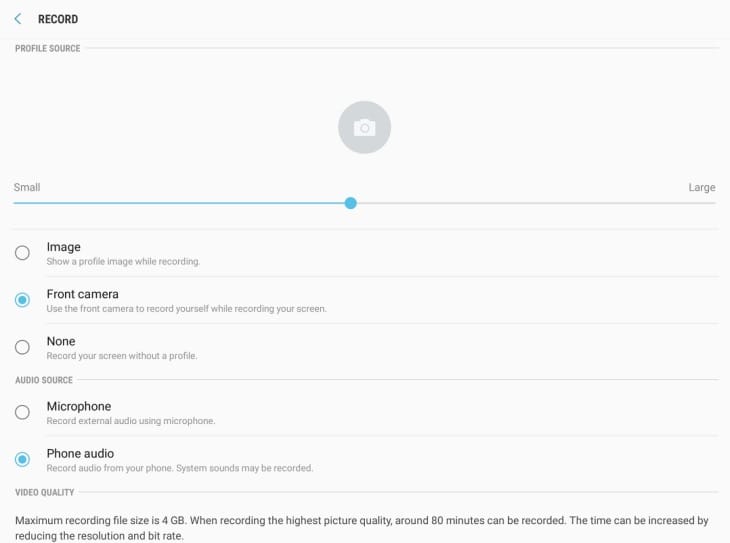 Once you are done recording a video, Samsung has made it really easy to customize your video and cut the length if needed, then quickly share it off to social media to show your audience. One little feature that Samsung has thrown in there which we enjoyed, is the ability to create a quick GIF from videos that you have just recorded, it is really straight forward and works really well.

We tested out one of the most popular Marvel games out on Android at the moment, which is Marvel Future Fight. The game runs well in all modes which we tested, although we have to say that there was noticeable lag during ‘Extreme Alliance Battle’ which we couldn’t really work out why, since the same mode on an iPad Mini 2, two generations old could handle the same mode without problems.

Other popular and performance intensive games such as Vainglory and Injustice 2 ran without any problems and we have to say, looked beautiful on that display – if you haven’t realised yet the display is without doubt the prize attraction on offer here.

We would say that the tablet is more than equipped to deal with gaming needs and any lag encountered could just be the case of the developer not taking the time to optimize properly – an issue which could be resolved in future patches. Running the likes of Minecraft, Clash of Clans, Hearthfire and Clash Royale should be an absolute dream for most of you.

GALAXY TAB PRICE AND WHERE TO BUY:

Samsung has set a £599 price tag for the Galaxy Tab S3 and at the moment we do not see any major reductions on this since it has only just hit the market. If you want to pick up one right now and upgrade to this media powerhouse, you can buy the Galaxy Tab S3 from Currys here who offer free delivery for the same price.

Samsung has delivered a tablet of the highest quality here, packing pretty much everything you would ever need in terms of multimedia, gaming and work task capabilities. The display is the finest we’ve seen on any tablet and the average 12 hours of battery life for watching HD videos is going to be very useful for those planning to take this beast on long haul flights or on the road to keep children occupied. With HDR on board, the hefty price tag could turn out to be worth it in the long run if watching movies is your thing and when HDR content is rolled out on a much larger scale. It may ultimately come down to a battle between Galaxy Tab S3 Vs iPad Pro with Apple’s latest model costing £615 but with no Apple Pencil included – this is an extra £100 on top.

Are you impressed with the Galaxy Tab S3 and convinced that this is going to be your new tablet? Let us know your thoughts below and if you have any other questions which we can help with. 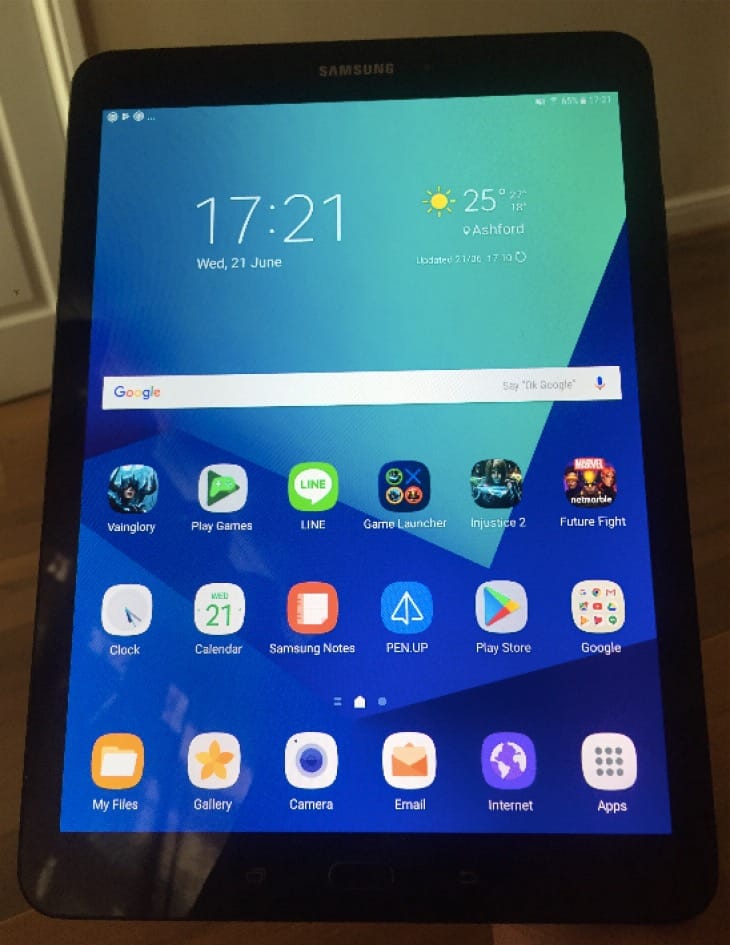 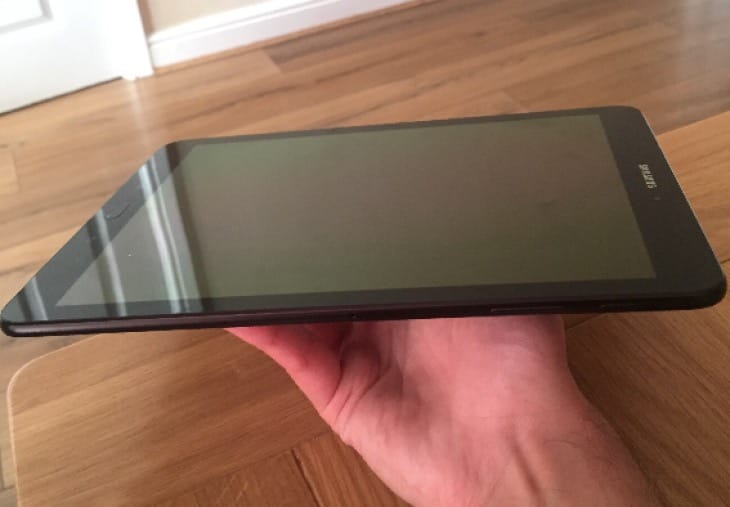 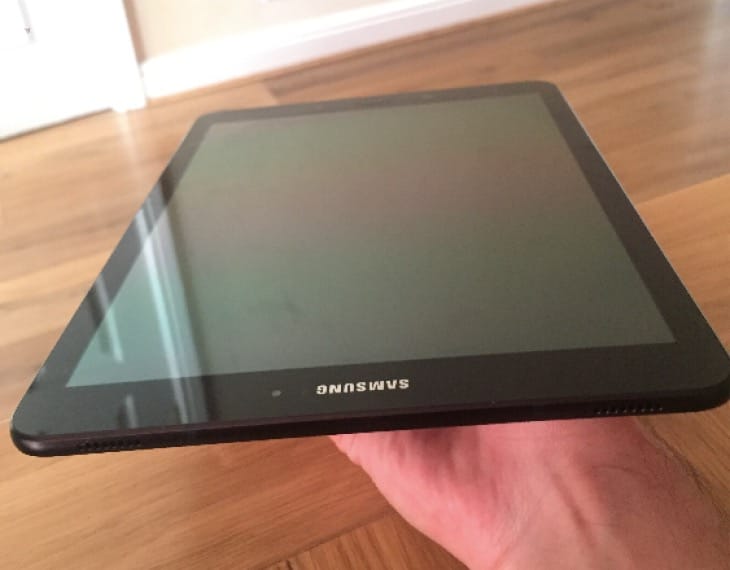 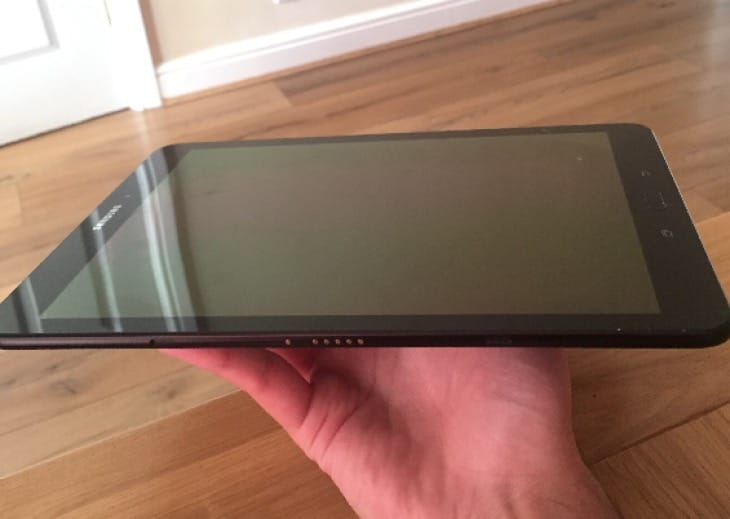 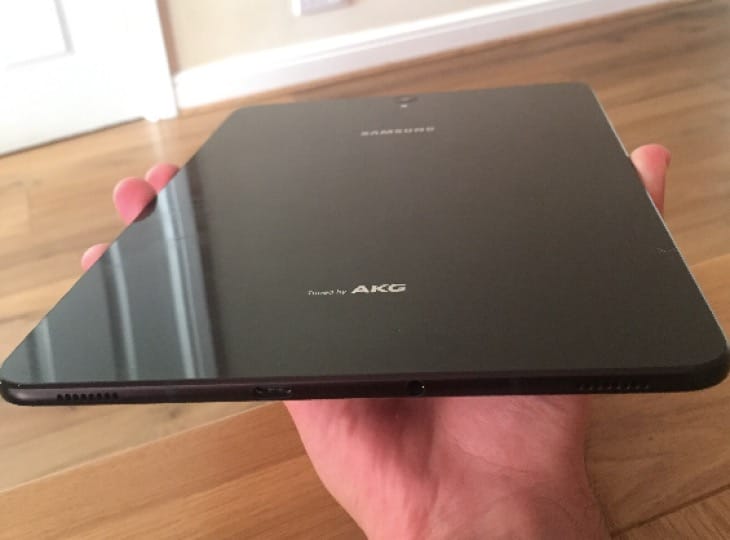 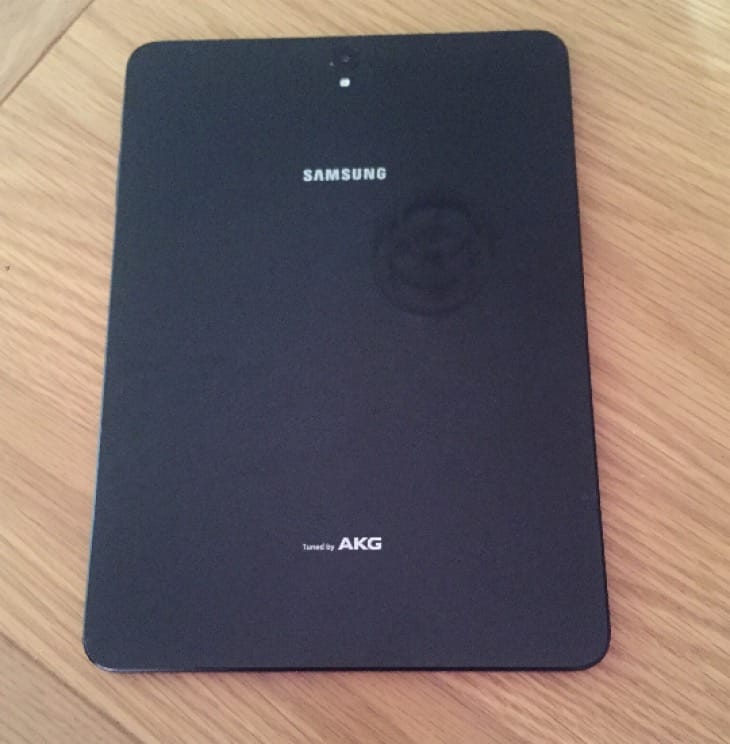