The Samsung Galaxy Tab S 10.5 was introduced in June 2014, as a direct competitor to the Apple iPad, although some people felt that its screen was just slightly too large. With this is mind, it has to be one of the reasons why its successor is rumored to come with a smaller 9.7-inch display instead.

We have seen a great deal of rumors in regards to the Samsung Galaxy Tab S2, with its release date and launch being two of the most talked about. While Samsung has yet to make an official announcement, it would make sense for them to announce its existence in June, just like it did last year with the current model. 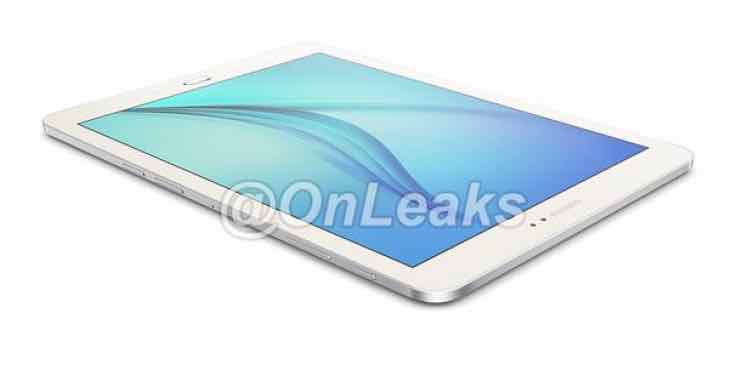 If this is the case, then we only have weeks to wait, although we might not have to wait that long to see what it looks like. We say this because @OnLeaks believe they now have a render of the upcoming Tab S2, and looks to be even thinner than the iPad Air 2.

There is not really too much to go on, and so we don’t know if the Galaxy Tab S2 will be plastic, or if Samsung will go for another materiel? However, most rumors do suggest that it will pack some pretty hefty hardware, such as 64-bit octacore processor, 2,048 Ã— 1,536 pixel resolution AMOLED display, 32GB of storage and should run on Android 5.0 Lollipop.

It will be interesting to see if people plan on upgrading their Tab S 8.4, as many people are still happy with this model because it being the perfect size, and also has benefited from several firmware updates to make it far better than it first was?

Having said that, with Samsung offering Edge models on its smartphones, there is now speculation that this could be passed on to its upcoming tablet range, with this new model being a prime candidate.