Samsung is still being relentless in fighting Apple on two fronts, smartphones and tablets, and yesterday they offered their latest tablets to take on the iPad Air and mini. On paper it would seem that that the Samsung Galaxy Tab S has the iPad Air beat, but we all know that it comes down to much more than specs alone.

Saying that, most Android users will not care too much about that and so could prove a strong factor in Samsung Galaxy Tab S sales, and this could jolt people’s eagerness into an iPad Air 2.

Don’t think for one moment that Apple will be forced into releasing its 2014 iPad lineup early because they don’t work like that, although after seeing the Galaxy Tab S specs, it is clear that Apple has some ground to make up.

Just think if the iPad Air 2 was able to offer similar specs mixed with what many believe to be a better mobile operating system, then things could bode well for the next-gen iPad.

However, don’t get over excited just yet, as recent rumors suggest that the iPad Air 2 will come with a minor speed improvement and a better camera, and that’s about it. We can also tell you that production of the 2014 iPad Air is said to begin later this month. 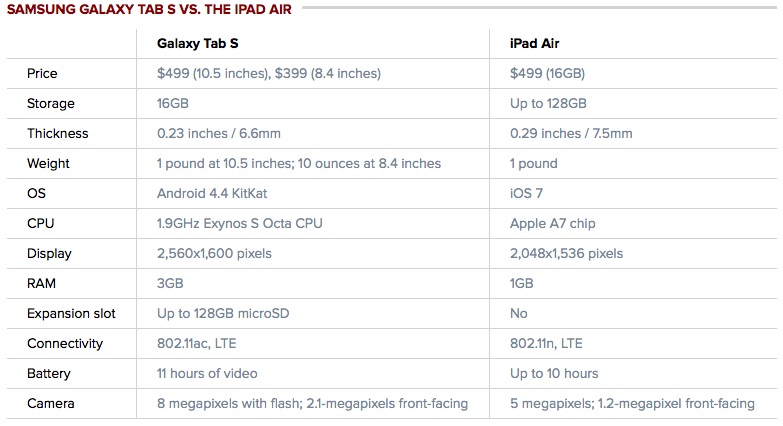 Above is an image of the Samsung Galaxy Tab S vs. iPad Air where it compares prices and specs. See for yourself just what has Android users so excited, especially as the new Samsung tablet is thinner than its rival.

This does make us laugh though because we have already heard some Android users saying how awesome it is to have a tablet so thin, but go back to October and they ridiculed the iPad Air for being so thin and accused it of being a gimmick.

Both platform users are accused of having double standards, we just wanted to point this particular one out because it was comical.