We’ve only just told you about the impressive looking, upcoming Samsung Galaxy Tab 10.1 device, but now we have confirmation that Samsung will be planning to bring another slightly smaller version of the Galaxy Tab to market very soon.

Samsung has been sending out invites to their Mobile Unpacked event at CTIA 2011 which will start on March 22nd over in Florida USA. Take a look at the accompanied picture they sent out with the invites, as reported by Engadget. 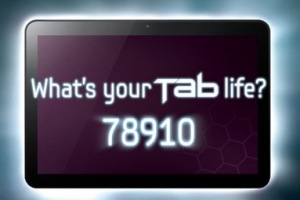 As you can see, the numbers 78910 are featured, which is obviously a hidden confirmation that the company are planning to release an 8.9-inch version of their Galaxy Tab to join the original 7-inch model and the upcoming 10.1-inch premium version.

The question here is though, do we really need another Galaxy Tab to think about? We feel that the 10.1-inch version is more than enough, and the inclusion of another 8.9-inch device may only serve as a confusion for consumers. Samsung on the other hand, obviously feel that the time is right to capitalize on the success of their original Galaxy Tab by offering one more version for consumers.

What are your thoughts on this? Would you be interested in this 8.9 Galaxy Tab or do you think they are over-doing it? We’ll let you know once we hear of any hardware changes for this model.