The final name may surprise a lot of you, since it was generally thought that the device would be named the Galaxy Tab 2, not only because it’s the second generation Tab, but also to coincide with the release of the Samsung Galaxy S II which has just been confirmed also.

However, let’s get down to the real details here. The Galaxy Tab 10.1 will feature some pretty hardcore specs, and they include a 1Ghz dual-core processor, a 8 megapixel rear camera, 2mp front camera, 1080p recording and playback and a choice of either 16GB or 32GB of storage.

It will come with both 3G and WiFi support, and you’ll be pleased to know that the Tab 10.1 will also come equipped with Android 3.0 Honeycomb. As for release and carrier information, it will first be available in Asia and Europe sometime next month, with Vodafone looking to be the first carrier to release, according to Engadget. 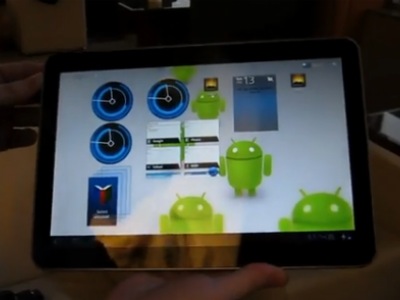 Unfortunately, we don’t have any release information for US yet, or an indication on what price it will carry. Hopefully Samsung will price this fairly, and cheaper than the Motorola Xoom. An early contender for best Android Tablet on the market? – It certainly looks promising.

We’ve found an excellent video review over on YouTube for you to take a look at, courtesy of the guys at PhoneDog.com. It gives you a first look of the device in action, and also an idea of just how smooth and responsive the Honeycomb UI is. Check out the video below and let us know your first impressions on the Samsung Galaxy Tab 10.1.