Android 6.0 Marshmallow has been around for almost 5 months now, and not all flagship handsets have the update yet. However, a new Android 6 Marhsmallow update roadmap for the Samsung Galaxy Series has now been revealed; so the Note 5, Galaxy S6 Edge+, S6, and S6 Edge should all be getting the update this month.

It’s worth pointing out that the Samsung Galaxy S7 already comes with Marshmallow preinstalled, although this does mean that the S7 will not get the Android 7, (N) update until a year’s time if we are to go by this release window.

It’s always been a bit of a sore subject for the likes of Samsung to make the latest version of Android available to owners of their handsets, but this is the way things have always worked with Android. However, the latest models of Nexus handsets and tablets will benefit from Android 7 from the start, which is expected to be revealed in March and released in October. 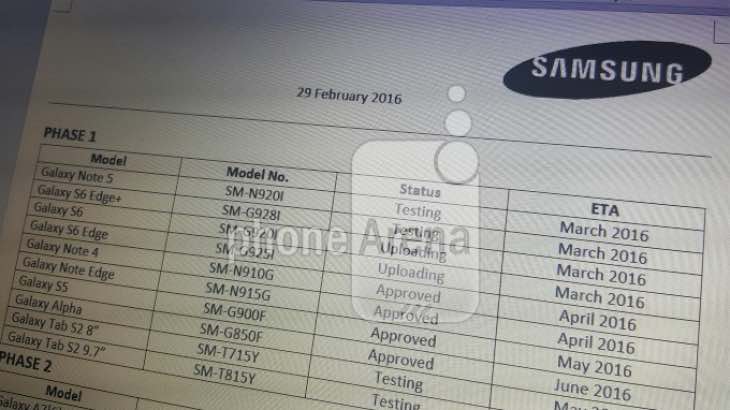 Going back to that Samsung roadmap, thanks to Techradar for Android 6, and the other devices and dates are the Samsung Galaxy Note 4 and Note Edge for April 2016, the S5 for May, along with the Tab S2 8 and 9.7-inch. And finally, the Samsung Galaxy Alpha will receive the update in June.

Android N details are sparse at the moment, but Android Police has an early look at the redesigned notification shade, along with the quick settings panel as well.

It’s worth pointing out that what is known so far is based on an early version of Android 7, and so Google is likely to make further changes to these features.