How are you enjoying your Galaxy S3 at the moment? Is it everything you could possibly want from a smartphone, or do you expect slightly more? The handset may have only just put its foot down in the market, but we’re already hearing of a potential successor in the Samsung Galaxy S4 and it may have one or two features that will simply blow you away.

At the moment, most of the Android discussion going on right now centers around the Galaxy Note 2 which is just launching in the US, and rightly so with some really impressive hardware specs out of the box backed up by the fact that it ships with the very latest version of Android Jelly Bean – a crucial factor in decision making these days.

Interest in the current Galaxy S3 handset seems to have died down significantly as a direct result of the Note 2 hype and even those who own one are not too happy at the moment since Samsung continues to delay on the global rollout of Android 4.1 Jelly Bean that still isn’t available in many countries at the moment.

With this in mind, you can bet that a lot of consumers are already starting to think about the Galaxy S4 and early rumors suggest that it is going to be one beast of a smartphone, with mouth-watering specs such as a 4.8-inch OLED screen, Android 4.2 Key Pie Lime and edge to edge display technology, which may end up looking something like the mock up below. 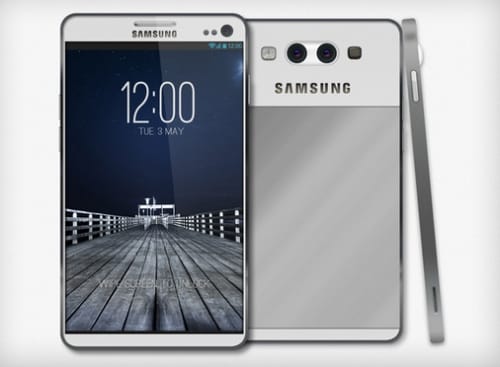 Other specs that are being whispered down the grapevine include a 13 megapixel camera, 2Ghz quad-core processor, 3GB of RAM, a ‘Skype supported’ 1.9MP front camera and wait for it, a potential mammoth of a battery in the region of 3200 mAh. Most of you will agree with us that these are truly next generation specifications and definitely those that fall in line with the caliber of a new Galaxy S smartphone launch.

Whether these are legit though remains to be seen but it’s no secret that Samsung now favors OLED materials as their preference when manufacturing displays. You only need to pick up a PS Vita to see just what a difference OLED technology makes compared to the rest, so even if the other specifications do not turn out to be true, let’s hope that the OLED part remains as smartphones now need to make the transition into OLED.

How do these initial specifications sound to you – would it be an instant purchase or not? Let us if you would like to see OLED on the next Galaxy S4 smartphone, bearing in mind that it would most likely mean an increase in consumer price as well.