Earlier on we gave you a useful specs comparison chart to look at, letting you see how the newly announced Samsung Galaxy S4 compared against the current Galaxy S3 in a battle of hardware specs. Now we have the first wave of Galaxy S4 hands-on reviews for you to check out, giving you an opportunity to see the device up close and personal despite its unveiling only hours ago.

We’re sure you have already heard this numerous times, but it’s fair to say that the new Galaxy S4 looks almost identical to the Galaxy S3. Whether that is a good thing or not remains up for debate, but the hardware differences between the two will be the key differentiator we feel here.

You’ll also be pleased to hear that the Galaxy S4 is going to be shipping with the latest version of Android out of the box as well – Android 4.2.2 Jelly Bean. If you watch the video, you’ll see an introduction to some of the new camera modes on the Galaxy S4 that are available with the 13 megapixel senor, including a new mode which allows you to take pictures using both the front and back cameras at the same time. 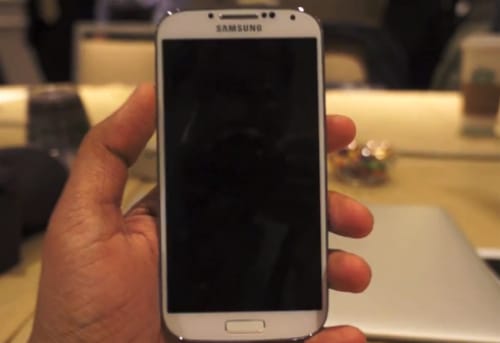 There’s also a nifty looking Jedi force feature called ‘Air Gesture’, that will allow users to navigate through menus of the device and photos by simply waving your hand across the screen. In a second video that we have for you below, you’ll see specifically how the Galaxy S4 compares against the S3 on video and truth be told – there isn’t a lot of difference.

Watch the footage for a general feel of the new S4 and let us know if this device appeals to you already. Are you disappointed with the design and physical home button, or are you still pumped up for its release?