Earlier on this week we told you about the exclusive Samsung Galaxy S4 variant that the Japanese market would be receiving, in the form of a stylish Blue Arctic model. Now, we have the first video straight from Japan to show you, giving you an idea of how the Blue model looks when compared to the traditional black Galaxy S4.

To recap, Samsung’s flagship device is launching in Japan this week and it looks like they will have an exclusive color all to themselves. The Blue Arctic variant joins the Black Mist and White Frost colors, and arguably looks the best out of the three – especially for those that loved the Pebble Blue Galaxy S3.

Now you can see what the device looks like yourself, thanks to an early video from Japan. We see the device running on NTT DoCoMo which has the Blue Arctic color and what it looks like side-to-side with the black model. We can’t help but notice that the device also seems to be something of a fingerprint magnet, but this is obviously easily rectified with the right care and attention – or a case on the back. 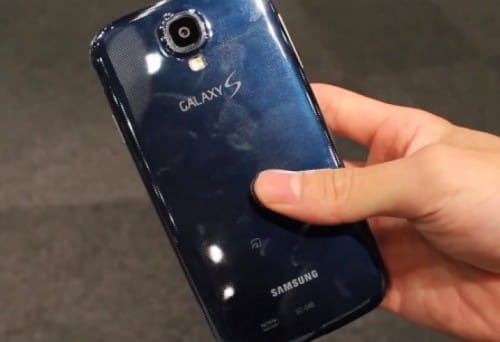 Amid the interface browsing on the device, you can also spot what appears to be a cartoon character making its way across the display screen. It probably looks a bit bizarre to you and me, but no doubt it will provide a buzz for the Japanese audience. Watching the video makes us wonder if the device will ever be announced for a release in US and Europe – we would easily prefer an Blue Arctic model over Black Mist or White Frost.

Take a look for yourself and let us know what you think about the new color. Are some of you even thinking of importing one?