We know news about the Samsung Galaxy S3 going to another carrier without Jelly Bean is going to be taken two ways by current users, which would see some Galaxy S3 owners understand that the Android 4.1 Jelly Bean release is now in the hands of US carriers, or the more frustrated users might feel that Samsung need to focus their efforts on delivering software updates in a quicker fashion, rather than many months after Google releases them.

Samsung’s Galaxy S3 lands on MetroPCS without the Jelly Bean update — within the last couple of days MetroPCS released an announcement, which explained a “no annual contract” would partner with Samsung’s flagship Galaxy S3 smartphone for an option without shackles. In their opinion this means the user would have “more choice” at the same time as delivering a better “value” service.

You can see MetroPCS explaining why they think users are better to purchase the Galaxy S3 with them in the press statement below, which also details the service plan costs that start at $30 a month. 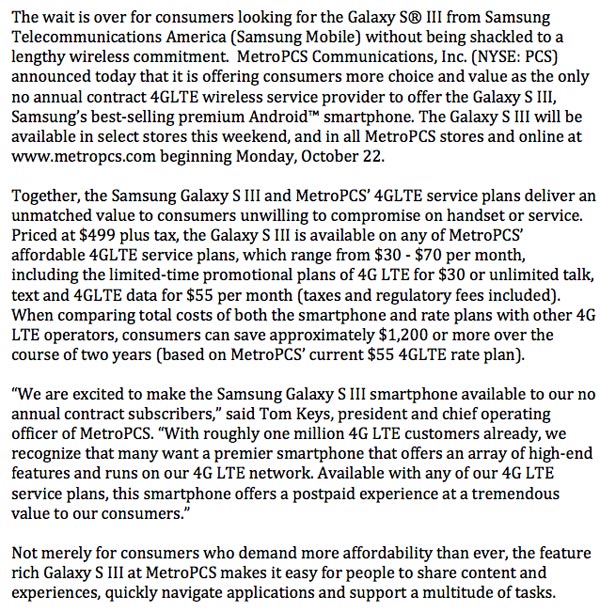 If you haven’t purchased the Samsung Galaxy S3 and live in the United States, would you consider MetroPCS? The US service will start selling the Samsung Galaxy S3 from Oct 22. If you are in the UK and currently own the Galaxy S3 on Vodafone, then you might want to read about the Jelly Bean update being planned for release tomorrow as well in this article. It is worth noting that this plan is subject to change, and the same article updated users about problems with O2’s Galaxy S3 Jelly Bean update that never started as planned this week.