Now that we’ve moved into November it looks like analysts are looking at stats again for the most popular smartphones, and in the UK it seems that the Samsung Galaxy S3 has proven itself again and kept the top position for half a year. You can track the UK’s most popular smartphones each month directly on the uSwitch website, which revealed the iPhone 5 gained three places in the UK last month but failed to knock the Galaxy S3 from the top spot.

The stats are said to take a number of figures into account, which include pay monthly sales, pre-orders, and also live searches. You can see the uSwitch mobile tracker on this page, although a drop down box allows you to see data for the last year. It will be interesting to see what smartphones win the UK battle through the shopping season, although there are a number of factors that will likely help create a few surprises. This includes new Nokia and HTC Windows Phone 8 devices, and the launch of the UK’s first 4G network from Everything Everywhere.

Samsung Galaxy S3 vs. iPhone 5 in the UK by stats – looking at the data on the uSwitch mobile tracker we can see that Samsung’s 16GB Blue Galaxy S3 currently holds the top spot with the 16GB Black iPhone 5 taking second place, although the previous month saw the same Galaxy S3 device keep the number one place with the iPhone 5 in 3rd position. It is worth noting that Apple’s 6th generation iPhone only launched in September, so it will be an interesting battle for the number one spot over Christmas.

Samsung’s most successful Android device to date is the Galaxy S3 and while these stats arguably show the most popular UK mobile phone right now, it shouldn’t be used as a factor for the most suitable smartphone for your situation. Every user has different needs and if you’re trying to decide between the Samsung Galaxy S3 vs. iPhone 5, you might need to see a few video reviews and other insight before making a choice. It is also a good idea to get hands-on at your local retailer as well.

The image below is Samsung’s take on the difference between both devices, and this Samsung advertisement wanted the Galaxy S3 vs. iPhone 5 specs to do the talking rather than persuasive videos. You can see a couple of video reviews in our earlier article, or see the iPhone 5 vs. Galaxy S3 video below this article that runs for just over 11 minutes and has had almost 1 million views. 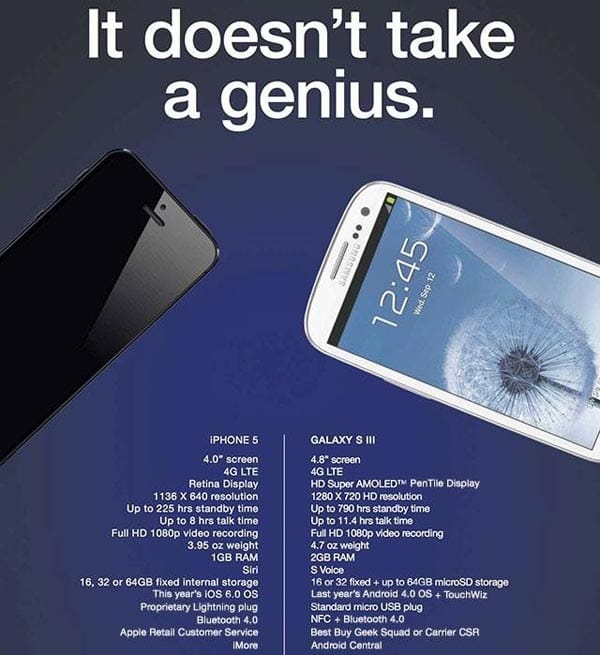 Samsung Galaxy S3 vs. iPhone 5, would public popularity influence your choice? Has this been an easy decision for you, and if so let us know why in the comments?