The success seen with the Samsung Galaxy S3 has to be something the company can be proud of, even while Apple is attacking them for apparent copying, which saw the Galaxy S3 set a new record when it comes to smartphone sales. The figure for the first 100 days is pretty impressive, and saw the Galaxy S3 shift more than 20m devices. You can read about this figure in this article and also see in the comments that some people would never move to an iPhone thanks to the way iOS is controlled, which would even be the case if the iPhone had been given for free.

Samsung’s most successful Android phone will receive Android 4.1 Jelly bean at some point this month, and the Galaxy S3 has also seen a number of Jelly Bean leaks leading towards the release date, currently unknown but certainly within the next couple of weeks, which a few users gave a try thanks to some interesting custom ROMS.

Samsung Galaxy S3 sorrow during success — you can’t please everyone when you launch a new smartphone and it’s fair to say that some people do experience some major problems, which others manage to escape for a number of reasons. This had been seen with the battery life issues with iPhone 4S, and even while Apple confirmed it had been an issue, not every user had that problem.

We’ve heard from a number of Samsung Galaxy S3 owners that are suffering from battery life problems, Jelly Bean might fix their problems, and some Galaxy S3 users have even returned their handsets. The main issue is trying to enjoy the phones capabilities without losing too much battery life, and one user said “this phone can’t run for long with this kind a battery“, and others are a little more direct with comments like “the Galaxy S3 battery sucks“.

How is your Samsung Galaxy S3 battery life, and overall are you happy with the smartphone? Others have reported numerous problems like screens cracking under little pressure, but we’d love to know what you think of the Galaxy S3 overall, especially considering it is the most successful Android handset to date. 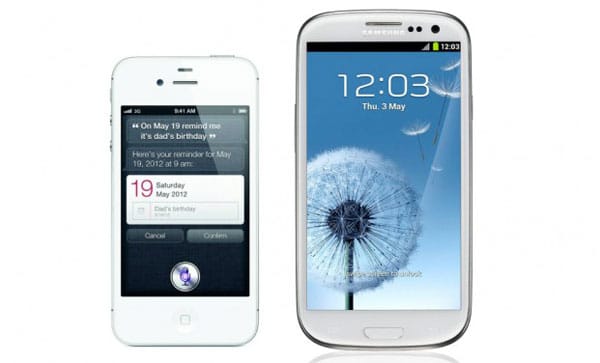 Apple iPhone 4S vs. Samsung Galaxy S3 — this isn’t a comparison that could be classed as a fair fight, especially considering the 4S is last years phone, and we’d expect the iPhone 5 vs. the Galaxy S3 to be a better match. With that said it seems that the majority of blogs have run this comparison, including ourselves, so it will be interesting to see how the iPhone 5 stacks up against the S3 in the next few weeks after its specs are confirmed.

We have seen a number of users move from the iPhone 4S to the Galaxy S3 over the last year, and some have liked the differences while others cannot get on with Android when compared to iOS. One of our readers told how he parted with two 4S’s for the Galaxy S3, which resulted in much better battery life, so it seems that the S3 battery isn’t that bad for everyone. The screen size difference would be enough for some people to never want an iPhone, and making the next generation a little longer is still not enough.