The popularity of the Samsung Galaxy S3 cannot be contained and the flagship smartphone has rocketed to the top of another US cell phone carrier. T-Mobile popped a short message on their Twitter account explaining the best selling handset, which of course had been the Samsung Galaxy S3 and we’re talking “all-time” here, so it’s certainly a major landmark for the Galaxy S3 as far as T-Mobile are concerned.

This news looks much better for Samsung than it does T-Mobile, and shows the continued success the brand is having in its battle with Apple and now the new iPhone 5. You can see the tweet below that is very vague and misses out on some crucial information, like the amount of Galaxy S3’s sold overall.

T-Mobile might want to hold back that information if you consider the likelihood that they sold less Galaxy S3’s than Verizon or AT&T. It is now clear that the Galaxy S3 sold more than other MyTouch devices on T-Mobile, and is now the best selling flagship phone from Samsung to date with the Galaxy S4 needed to beat this record considering the large Note 2 display might not be for everyone. If T-Mobile sold the iPhone directly it would’ve been interesting to see how that device performed in comparison, although this is not the case so their partnership with Samsung is certainly an important one. 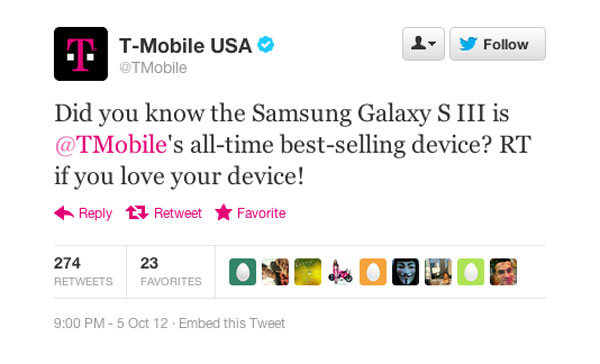 Those of our readers that want to see the Samsung Galaxy S3 vs. iPhone 5 when it comes to battery life and screen should see this article, which looks at a report detailing these areas for each device and shows that popularity has a lot to do with the success of a smartphone in the current market.

Did you purchase the Samsung Galaxy S3 on T-Mobile, and are you hungry for the Jelly Bean update? Christmas is almost upon us and the 2012 holiday shopping season will officially start with Black Friday, so it will be interesting to see how the mobile carriers market their devices from that date and in the coming weeks for a slice of the holiday sales.