A word of warning to all Android owners now, as it appears that a new exploit is on the loose which threatens to tamper with the dialing code on your device and wipe your entire data. The good news though, is that it looks like the problem is solved instantly if your Android device is running Android 4.1 Jelly Bean.

However, it does mean that the Samsung Galaxy S3 on Android 4.0 could be vulnerable to the exploit until Samsung decides to provide the highly anticipated update to Jelly Bean – globally that is, not just to Polish users.

Having said that, there are reports that the international version of the Galaxy S3 running Ice Cream Sandwich is also protected from this exploit as well, leaving some carrier versions exposed. The problem at hand involves something known as the USSD code, which can wipe the whole device if initiated by a line of code that is planted in a certain web page – without asking for any confirmation to do so from the user. 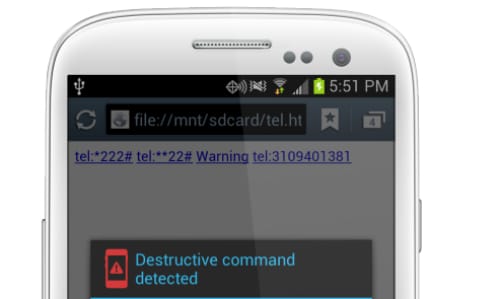 Further investigation by Android Police suggests that the AT&T Galaxy S3 is vulnerable to the exploit, but only if you have not installed the latest OTA update, which is unlikely for most of you. Basically, you want to ensure that you are running the latest version of software possible in order to protect yourself from this nasty sounding bug.

If you happen to have a custom version of Jelly Bean already, there’s a good chance that you are protected as well. Another thing to note is that Samsung appears to be patching up the update behind the scenes, and it should be further ammunition for shortening the days before the global update to Jelly Bean finally appears.

For those asking, it does appear to be an issue specifically related to Android, not just Samsung devices. If you are still concerned about these increased dialer exploits affecting your Android device, you may want to give the Lookout security app a run out – details on that can be found here.

Have you experienced this exploit on your own Android device?