Samsung have an event scheduled for today in Germany and it’s widely assumed that they’ll reveal the Galaxy S3 Mini, although the release date would obviously be a little later. Within the last 24 hours we’ve seen some of the Samsung Galaxy S3 Mini specs leak and these were accompanied by a few images, some of which can be seen on this page.

It seems that the Galaxy S3 Mini will feature Android 4.1 Jelly Bean as previously reported, and also come with a 1.GHz dual core processor, 800×480 Super AMOLED display, and include a camera on the back with 5-megapixels. Love or hate it you will also find Samsung’s TouchWiz as well, although these specs aren’t as powerful as some first thought.

The Galaxy S3 Mini internals are said to include microUSB, NFC, a 1500mAh battery, Bluetooth 4.0, Android Beam, dual band WiFi, quadband GSM/EDGE and triband HSPA, 1GB of RAM, and a microSD slot that supports cards up to 32GB although you’ll find 16GB of storage as well right out of the box for the onboard storage. 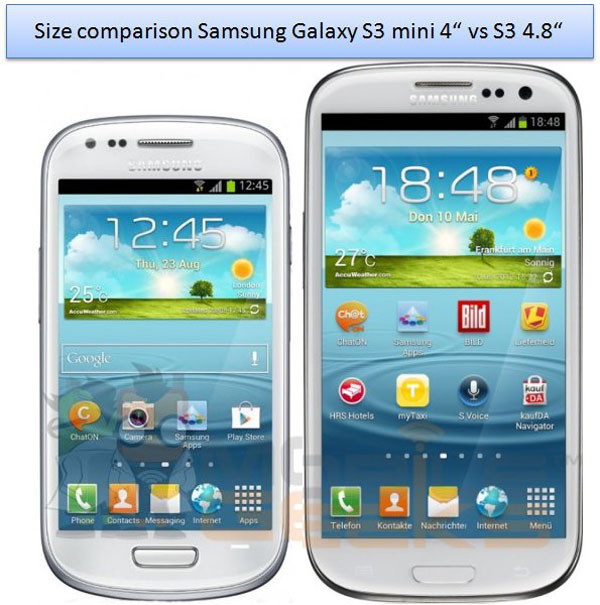 The source of these Galaxy S3 Mini images and specs can be found here, which is a German website so you might need to use Google’s translation tool. They point out that some of the specs could be wrong, so this alone makes us wonder about the credibility of this information. When it comes to the Samsung Galaxy S3 vs. Mini in size you can see the image above, although the source claims the Mini will be sized at 121.55×62.95×9.85mm, which is much smaller than the original model.

If these Samsung Galaxy S3 Mini specs are correct, are they what you expected? When comparing them to most other 4-inch smartphones it seems like a competitive device, although the official details will be revealed today, so check back on PR a bit later. You can expect some Samsung Galaxy S3 owners to be upset if the Mini releases with Jelly Bean before the update arrives on the flagship phone.