The hunt for Android 4.1 has been a regular routine for smartphone users around the globe, especially Samsung Galaxy S3 users wanting the Jelly Bean update on AT&T / Verizon, and it seems that the HTC One X is next for this firmware update, which we hear has seen a release in East Asia. The HTC One X Jelly Bean update will be running at Android version 4.1.2, although the firmware will also arrive in Asia for HTC One S users but the download date hasn’t been set at the time of writing.

HTC phone users will not only gain a lot from the Jelly Bean update, but will also find the new HTC Sense 4+ user interface. This news first broke in the popular XDA developer forums within the last couple of days, which you can see via this forum thread. We also heard that this rollout had been confirmed at a recent press event as well.

Samsung’s Galaxy S3 Jelly Bean update has been the target of US users for many months, and they had to sit back and watch Europe gain Android 4.1 country-by-country. This changed in the last week with Sprint users finding the Galaxy S3 Jelly Bean update being sent OTA, which came after Samsung sent a reassurance to those users in the United States.

Samsung leaves the Galaxy S3 Jelly Bean update to carriers — we explained previously that Samsung offered some reassurance to US users and made it clear things had been handed over to the networks, which means the rollout would be handled by carriers although we’re sure a staggered approached would have been Samsung’s advice. The likelihood is to see the Galaxy S3 Jelly Bean update land on AT&T next, which will be quickly followed by Verizon Wireless. 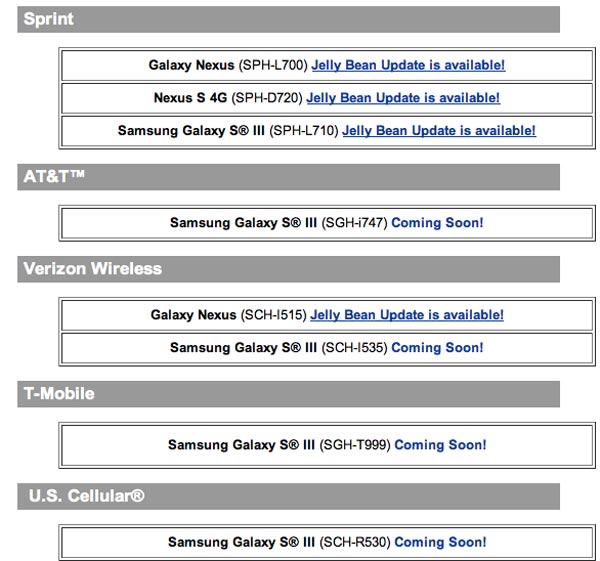 It is a long shot but if we find out AT&T is next to receive the Samsung Galaxy S3 Jelly Bean update, then there’s a pretty good chance that Verizon Wireless will be after that carrier, and then T-Mobile followed by U.S. Cellular. How do you feel about the possibility of this rollout order?