4G LTE connectivity has become a normal practice for most consumers in the US, but the idea of having 4G data speeds in the UK is still considered something of a luxury. News has spread however that the first 4G LTE service is due to roll out soon and the Samsung Galaxy S3 may be one of the first handsets to support the new speeds in the UK.

If you’re not familiar with Everywhere Everything, this company may soon become a household name in the months to come. They are the only network in the UK that has the official go ahead to launch a 4G service to UK consumers and customers may soon be able to finally enjoy smartphone data speeds that are quicker than their normal broadband speeds at home.

We have a video to show you now courtesy of CNET, which tests a 4G LTE Samsung Galaxy S3 on the Everything Everywhere network, using the popular SpeedTest application from the Google Play Store. The results of the test were pretty amazing, averaging a download speed of 39.57Mbps, and upload speeds of 23.95Mbps – how many of you can honestly say you can manage faster speeds than that from your broadband ISP? 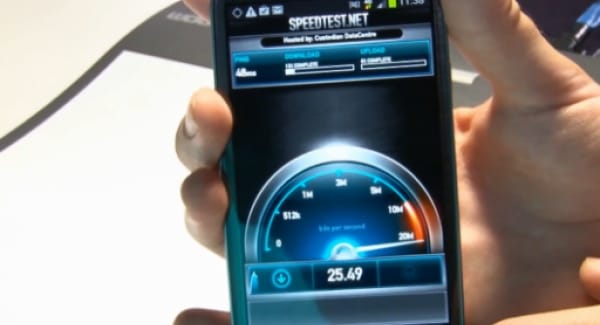 The good news is that Everything Everywhere or EE is connected to T-Mobile and Orange. The bad news however, is that you’ll have to take out a separate 4G plan with T-Mobile and Orange in order to make use of the faster speeds – when the service launches that is.

Both T-Mobile and Orange have already updated a section of their websites, to inform customers of the imminent switch to 4G – you’ll find the information for T-Mobile here and Orange here. The most disappointing aspect among all of this though is that there is still no set date for when 4G will finally be available in the UK.

As a UK consumer, are you interested in finally catching up with the rest of the world with 4G smartphone data speeds? The Galaxy S3 will be compatible straight away, but HTC should have a collection of supported handsets as well.