The Samsung Galaxy S3 is considered by many to be the cream of the crop at the moment as far as Android handsets are concerned. While all the focus has been on Samsung’s new and upcoming smartphones lately, the company may also be planning to spring a surprise for all of you music purists out there.

You may not realize it, but aside from Samsung’s recently announced Music Hub app for the Galaxy S3, the Korean manufacturer also offers the Galaxy Player, which is their answer to the iPod Touch providing a musical database with access to Android apps via the Google Play store.

The current Galaxy Player is version 5.0 and was released towards the end of last year. However, we’re now hearing that Samsung is already thinking of a successor and it may be equipped with a mammoth 5.8-inch display screen. The guys over at SamMobile have gotten hold of an alleged screenshot of the device and it basically looks exactly like the Samsung Galaxy S3.

That isn’t a bad thing either necessarily, as the current Galaxy S3 is one good looking device and who’s to blame Samsung for replicating the design like for like with a new Galaxy Player for consumers that really don’t want to splash out on an aging iPod Touch.

An initial specs list is pretty impressive too, with the new Player looking to sport a 1Ghz dual-core processor, a 3MP rear camera with VGA front camera, FM radio, Bluetooth 4.0, GPS support and a 2,500mAh battery. On the downside, it looks like the new player will only ship with Android 4.0 Ice Cream Sandwich with Touchwiz, meaning that an official update to Jelly Bean may not happen. 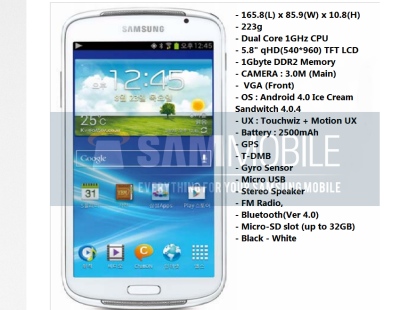 Don’t forget that this won’t have phone functionality, so there probably isn’t a need for a blazing quad-core Exynos processor. It would be nice of course, but we have a feeling that a 1Ghz dual core effort will handle all of your media needs just fine. Are you interested in getting one of these and fooling everyone into thinking you have a Galaxy S3?

We’ll let you know when this is made official – it could happen at Samsung’s August 29 where we may see the Galaxy Note 2 as well.