It has been interesting to see the amount of blogs jumping on the news that Samsung’s Galaxy S3 has beaten the iPhone 4S in terms of sales, which in our opinion is a much better comparison than certain technology websites comparing Android sales to a singular phone (iPhone). With that said it is worth pointing out that this is the Galaxy S3 overtaking the iPhone 4S for just one month, which is also the month before the iPhone 5 launch.

This would be expected considering iPhone sales are at their lowest in this month each year, although this should no way discount how successful the Samsung Galaxy S3 has been, especially with those amazing pre-orders that hit well into the millions. The reason this is such a landmark moment is thanks to it being the first time the 4S has lost the top spot, in terms of the top-selling U.S. smartphone.

This hasn’t stopped some blogs getting confused with stating things like “iPhone 5 to beat Galaxy S3“, which is complete madness when you consider the 4S never lost the top spot other than the month before the new iPhone launch. Not to mention some crazy figures being thrown around about potential iPhone 5 sales, and while we might see an instant 10 million sales, it is said that 80 million people are waiting to upgrade to an iPhone 5 around the world.

Samsung Galaxy S3 success story – this is a device that Samsung and Android users can truly be proud of, which is only helped by the Galaxy S3 moving over 6.5 million units in the second quarter, and is expected to hit around 20 million within the first 6 months of launch. There are a number of reasons why Samsung did so well with the Galaxy S3 and these include the specs, which feature NFC and a 1.4GHz quad-core processor. What do you love about the Samsung Galaxy S3? 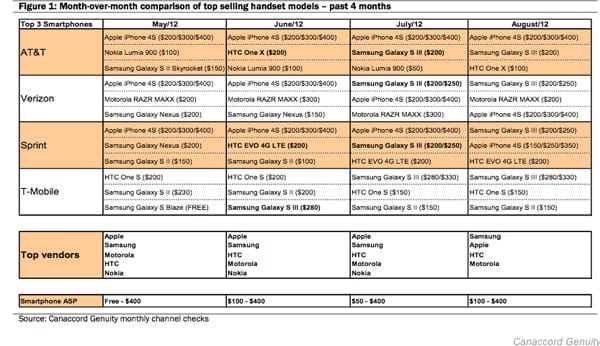 The image above shows that the Samsung Galaxy S3 outsold the iPhone 4S on Verizon, T-Mobile, and on Sprint. AT&T still saw the iPhone 4S take the top spot with the Galaxy S3 in second place, although overall the S3 came out the most sold smartphone in the United States last month. The sales chart is thanks to Canaccord Genuity,

Do you think the Samsung Galaxy S4 will be needed to beat the iPhone 5 sales, or is this an impossible task considering Apple only has one phone while Samsung has many? It will be interesting to see how the sales of the iPhone 5 go this month and until the end of 2012, which might see the new Apple phone hold the top position until this time next year. If you are in the UK then you might want to read about the Galaxy S3 gaining NFC payment abilities with Orange.