So far details regarding the Samsung Galaxy S2 have been scarce, in fact we don’t even know if this will be the name of the Galaxy S successor, yesterday we suggested that it may well come with LTE connectivity, now we are hearing rumors about the smartphone’s camera and processor and more.

According to a recent SmartDroid post it looks as if the second-gen Galaxy S may will feature an 8 megapixel camera, a dual-core Orion processor, 1GB of RAM, a 4.3-inch display and Android 2.3 (Gingerbread).

Obviously these specs have not yet been confirmed, however if they turn out to be true it shows that the Galaxy S 2 will be far superior to its predecessor, when the Galaxy S launched it featured a 5 megapixel camera, a 1GHz single-core processor, 512MB of RAM, a 4.0-inch display and Android 2.1 (Eclair) . 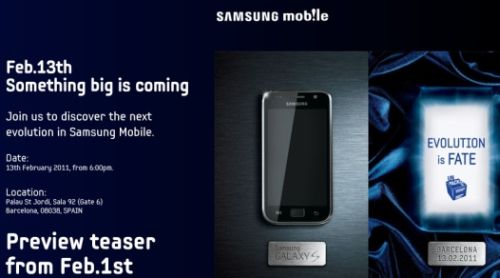 Above we have embedded an ad showing the Samsung Galaxy S alongside a mysterious device with the words “Evolution is fate” on it, apparently previews for this device will begin on February 1st and we presume that it will first be revealed in pulbic at Mobile World Congress 2011, this show runs from February 14-17.

As we hear more about the Galaxy S successor we will keep you posted, what specs and features would you like to see?