If you are thinking of picking up Samsung’s new Galaxy Note Pro 12.2, we have some further information on the tablet to share with you now. Specifically, we have a great heads-up on how this model in particular can handle gaming performance.

As we told you previously here, the Samsung Galaxy Note Pro 12.2 is part of Samsung’s 2014 tablet lineup alongside the near identical Galaxy Tab Pro 12.2. The WiFi version of the device is running on a slick 1.9 GHz Octa-core Samsung Exynos processor, with 3GB of RAM and either 32GB of 64GB memory.

In terms of graphics potential, the tablet will be utilizing the speedy ARM Mali-T628MP6 GPU. With 3GB of RAM and an Octa-Core chip as backup, gaming on the Galaxy Note Pro 12.2 is going to be complete breeze.

Any game from the Google Play Store should run like a dream and we have evidence of that to show you below – with a gaming test on Asphalt 8. Gameplay is unbelievably smooth and shows no signs of lag or slowdown whatsoever. 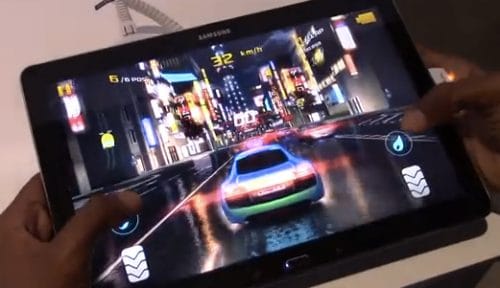 What’s even better is that the video is thought to be using the LTE Galaxy Note Pro 12.2 instead. This means that it’s using a slower Snapdragon 800 chip compared to the Octa chip on WiFi. With the game looking this good on the LTE model, imagine how much more impressive gaming will be on the WiFi version.

We can’t wait to see what Google’s new Nexus 10 can do in terms of gaming for comparison purposes. Take a look at the clip below and let us know if you are picking one up in the weeks to come.