We have some more details on the upcoming and recently outed Samsung Galaxy Note 8.0 device now, the tablet that is looking to provide a nice alternative to the Mini iPad and the ever popular Nexus 7 from Google. Samsung has now officially acknowledged the device, confirming that it will be on show at MWC 2013 next month – we now have what could be the very first picture of the device in the wild.

If you saw our previous article on the Note 8.0, you would have seen that the hardware specifications of the device are actually not that impressive. The Galaxy Note 8.0 is only shipping with a 5 megapixel camera, while the display is 1280 x 800 resolution and Super Clear LCD quality only.

There is a 1.6Ghz quad-core processor on board though, and the device will be shipping with the latest version of Android 4.2 Jelly Bean – so that’s more pleasing. Elsewhere we can now confirm a 4600mAh battery under the hood, MicroSD support on top of 16 or 32GB of internal memory, and HSPA+ connectivity support.

If you are looking at picking up an alternative to the Mini iPad or Nexus 7, you’ll want to take a look at the leaked image below, which is apparently an authentic peek at what the Galaxy Note 8.0 will look like. Make a note of the curved edge design which Samsung seems to have put a big emphasis on, while the back of the device looks a little plain in our opinion too, although it’s obviously hard to make a proper conclusion based on this single grainy image.

If this device isn’t equipped with the latest Exynos processor, we can’t see how they can justify charging $400 for it as speculated. At least it is set for a reveal at MWC 2013 though, so we’ll all get our answers soon. Let us know your first impressions, based on this image. 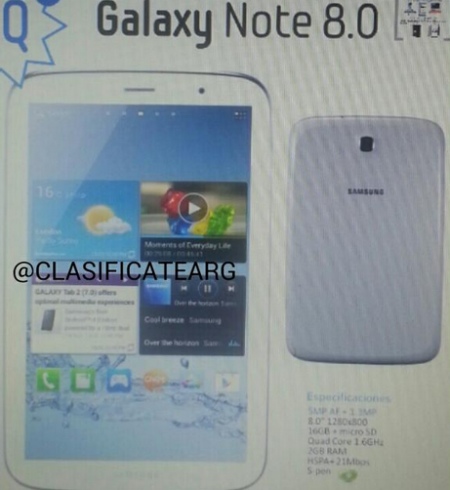