We have some sad news to those who own the Samsung Galaxy Note 8.0 Tablet WiFi version in the UK. Many of you may have been expecting a Lollipop update to come before the end of the year, but now Samsung UK has confirmed point blank that it won’t be happening at all.

The device launched almost two and a half years ago with Android Jelly Bean and has since seen an update to Android Kit Kat.

However, those hoping that Lollipop would be coming next have been delivered a bombshell straight from the horse’s mouth – in this case Samsung UK who has said this in reply to a customer on Twitter: 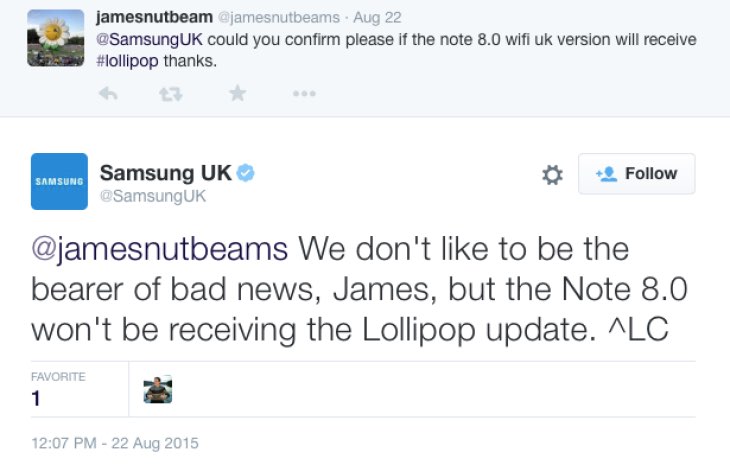 At this point, it hasn’t been confirmed whether this also applies to WiFi owners in the US, or if this is just what is going to be happening in the UK specifically.

Unfortunately, there doesn’t appear to be a reason either on why Samsung won’t update the Galaxy Note 8.0 WiFi to Android 5.0 Lollipop.

Either way, it will be down to hardware constraints or the fact that Samsung believes there isn’t enough demand. With this in mind, give us your thoughts on this below and if you would like to have seen it happen as a Note 8.0 owner.