Samsung has certainly been busy over the past few months, what with the release of their flagship smartphone, the Galaxy S4, and now the S4 Mini. However, they still have another killer product to come, which is the Galaxy Note 3. As yet, all we know about this upcoming phablet is sheer speculation, but we could have learned something very interesting.

According to a recent Tweet, there is to be an event called Samsung Exynos 5 Octa Evolved, and it’s there that they will be showing off the improved power and performance of the new chip, but don’t think there will be a Note 3 on show, as we are only speculating that this will be the chip used in the new phablet. 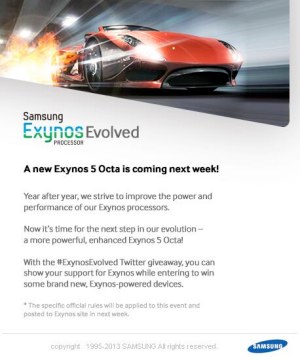 Having said that, it’s a good bet that we can expect to see the Exynos 5 Octa 2 processor in the Samsung Galaxy Note 3. As for the proposed performance figures of the new chip, we’ll have to wait until next week for those, but for now you can visit the Twitter page, where as you would have guessed there is a few interesting discussions going on as to what we can expect from the new chip, as it is sure to raise the bar.

Samsung Galaxy Note 3 release date nears — With the new Exynos 5 Octa event taking place next week, this has to be even more evidence that Samsung will unveil their Galaxy Note 3 handset during IFA at the start of September, and would be very near when the company released the previous two models. having said that, we do know that a few units have already shipped, but for R&D purposes only.