While the Samsung Galaxy S4 is one of the early highlights of 2013 and proving to be an immensely popular smartphone with consumers, it’s clear that a lot of you are prepared to wait as long as it takes for the elusive Samsung Galaxy Note 3 instead. The follow-up to the Note 2 is due for an announcement after Summer and now we could have the first accurate glimpse of what design changes it will have.

Previously, all we had to show you regarding the potential Galaxy Note 3 was this dodgy image at the start of June. Now, we’re pleased to say that the device has turned up again, this time in China and in much better quality. Fans of the Galaxy S4 design are going to be very pleased indeed, as it looks like Samsung are going to model their Note 3 design by taking key inspirations from the S4.

Popular social sharing website Weibo has again provided us with some juicy smartphone leaks, this time potentially offering a real glimpse of the future Galaxy Note 3. The image which you see here shows the alleged device concealed in a case, but offering enough to suggest that the design is going to match that of the Galaxy S4 – albeit offering another monster display screen. 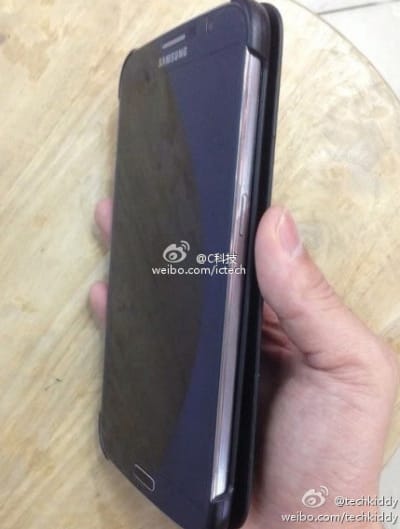 The size is thought to be around 5.99-inches, which would be an further boost from the already massive 5.5-inch screen on the Galaxy Note 2. If you look closely, you’ll also see that there is a very thin bezel indeed, almost covering the whole surface length of the device – perfect for those consumers with a fetish for edge-to-edge displays.

Other observations include a potential return for a physical home button, but one which looks a lot more slimmed down than the home button featured on the Note 2. Regardless of whether this is a fake or not, most of you will agree with us in saying that this looks like a beautiful smartphone indeed – let’s hope that the actual device turns out to look largely the same as this image from the Far East.

How bad do you want to get your hands on a Note 3? Are you prepared to skip the likes of the Moto X and the iPhone 5S for it?