You could easily think that the Samsung Galaxy Note 2 is a device without competitors, other than its previous generation, which is thanks to the massive 5.5-inch screen that is rare on smartphones. This hasn’t stopped a number of technology blogs comparing this so-called phablet to other much smaller phones, so today we wanted to take a look at a few of these comparisons for those still undecided.

The most popular smartphone the Samsung Galaxy Note 2 can be compared to would be the iPhone 4S, and expected features for the new iPhone 5, which could be classed as a comparison between chalk and cheese, as we’ve touched on before. In our opinion these two devices market to different users, and those that love everything about the Galaxy Note 2 would never dream of buying an iPhone.

The first video below this article takes a look at the main features of the Samsung Galaxy Note 2, which is thanks to an almost 14-minute hands-on video that demonstrates how this new device takes innovation to another level. You can see how the specs of the Samsung Galaxy Note 2 compare to the Nokia Lumia 920 in this article, which breaks down comparisons of form factor, display, processor, and much more. 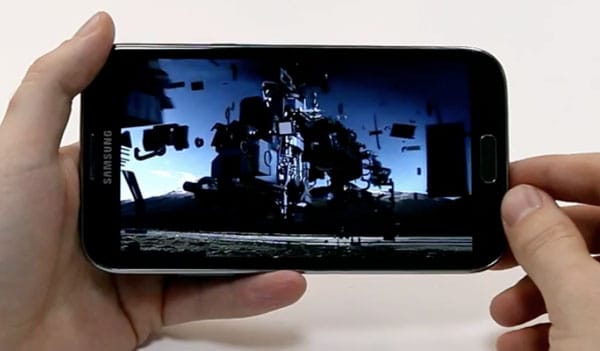 You can take a closer look at Nokia’s Lumia 920 in the second video below, which details the new Windows Phone 8 operating system and more in this hands-on video. The Lumia 920 features PureView optical image stabilisation that improves in almost every way, and innovation is noted thanks to a number of abilities including wireless charging and the PureMotion HD+ display. One area where the Galaxy Note 2 can never compete is bright colors, and Nokia’s Lumia 920 certainly wins here with its bright red, yellow, and other colors.

Our third video takes a look at the Motorola DROID RAZR HD, RAZR M, and RAZR HD MAXX. Again it’s worth taking a look at all these devices if you’re unsure what new smartphone to buy, especially if the big Samsung Galaxy Note 2 screen is not a deciding factor. Samsung are certainly giving these other phones a run for their money considering the Galaxy Note 2 is Samsung’s best package yet, in our opinion, and the 1.6GHz quad-core processor, S PEN, 8-megapixel camera, 2GB of RAM, and especially 5.5-inch Super AMOLED HD screen set this device apart from most others.

If you haven’t heard much about the LG Tuition then you should see this article, which takes a look at the LG Tuition vs. Galaxy Note 2. We love the Tuition’s specs but find the device lacking in many areas when compared to the Note 2, which includes a Rubberdium pen that fails to compete with Samsung’s S Pen. The horsepower on the Tuition is a dual-core 1.5-GHz Snapdragon S4 processor, which is impressive, but then it is up against a quad-core 1.6-GHz Cortex-A9 on the Galaxy Note 2.

You can also see how the HTC One X looks next to the Samsung Galaxy Note 2 in the last video on this page, or see the specs compared in this in-depth article. The One X is still considered one of the best Android smartphones, although can it really compete with the new Galaxy Note 2, or are the screen sizes too different to be considered similar options?

Would you still consider the Samsung Galaxy Note 2 the number one Android phone to own?